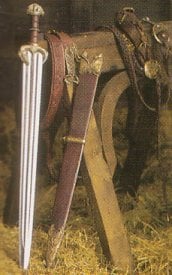 Gúthwinë from The Lord of the Rings film series

Gúthwinë was the sword of Éomer, borne by him at the Battle of the Hornburg, where he drew it alongside Aragorn to drive away the wild men battering the gate of the Hornburg.[1] Presumably Éomer also used Gúthwinë at the Battle of the Pelennor Fields, where he cast his sword into the sunlight and sang as he caught it, upon seeing the Standard of Elendil appear on the lead ship approaching on the Anduin.[2]

The name Gúthwinë is Old English, representing a Rohirric word meaning "battle-friend".[3] The two dots (diaresis) over the final "e" was added by Tolkien to indicate that there are three syllables in the word, which rhymes with "Tina" not with "fine."