Lebennin (prounounced [lɛˈbɛn.nɪn] le-ben-nin) was a fief and region in the south of Gondor.[1]

Lebennin was located south of the White Mountains between the Gilrain[2] and the Anduin.

Known as Fair Lebennin of the Five Streams, referring to the Five Rivers of Lebennin,[3] it was one of the faithful fiefs of Gondor. The city of Pelargir was in the south of Lebennin[1]

Lebennin was largely populated by Men of mixed blood, as many Men of Lebennin traced their ancestry to the forgotten men who lived in the shadows of the hills.[4] 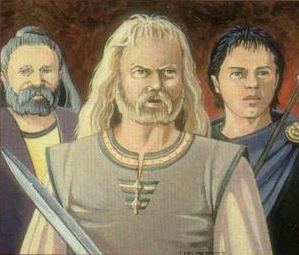 Lebennin is the most populous province in Southern Gondor. Its capital is Pelargir, and other landmarks in the region include Fanuilond (town), Glinduin (river) and Serni (river).[14]

For game development purposes, Lebennin was divided into Lower Lebennin and Upper Lebennin, divided by Pelargir and the river Sirith. Lower Lebennin was the eastern-most area in Central Gondor and Upper Lebennin was the western-most area in Eastern Gondor. Dor-en-Ernil lay to the west across the river Gilrain and Lossarnach lay to the east across the river Erui. The emblem of Lebennin was five wavy blue lines representing the Five Rivers on a white field. Aside from Pelargir, major settlements in Lebennin included "Ost Anglebed", "Glaniath", and Tumladen, along with Linhir which was also part of Dor-en-Ernil. The smaller settlements, some of which had fallen to enemy forces before the breaking of the Siege of Gondor, included "Ethilorn", "Sarnhad", "Malbarth", "Aerthir", "Lornost", "Erynos", and "Halach". A local tradition in Lebennin was the offering of gift baskets to the rivers in honor of the Five Sisters of Lebennin, though by the end of the Third Age few believed the Sisters were any more than a myth.