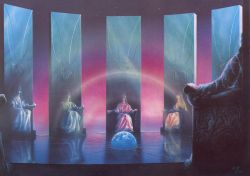 "Ring of Doom" by Jacek Kopalski

Máhanaxar, also called Rithil-Anamo,[1]:401 was the Ring of Doom, probably a hall or court where the Valar held their councils.

The Ring was outside the golden western gates of the city of Valmar, not far from the hill Ezellohar, with the thrones of the Valar arranged in circle.[2]

The Valar were sitting on their thrones while watching Yavanna chanting, bringing the Two Trees to life upon Ezellohar.[2] Ever after, the Powers sat bathed in the light of the Trees to hold their great councils, and here some of the most momentous decisions of Eä's history were made.

The name Máhanaxar is how the Amanyar called the Ring of Doom in Quenya. It contains the word Máhan "chief Vala", itself a loan from Valarin māchanāz[1]:402 "Authority".[1]:399

All in all, Máhanaxar is said to be derived from Valarin Māchananaškad, a compound that includes the aforementioned māchanāz. It has been suggested that the second element might mean "ring" and is related to Black Speech nazg.[3] Cf. also NASAG.

The word was translated as Rithil-Anamo in the Quenya of Aman. The word rithil, that probably means "ring", is otherwise unattested. The second word might be the genitive form of an otherwise unattested noun *anan (or less probably *anama), itself probably derived from root NAM (cf. Námo, the name of Mandos).[4]