"For Mîm came of Dwarves that were banished in ancient days from the great Dwarf-cities of the east, and long before the return of Morgoth they wandered westward into Beleriand."
― Quenta Silmarillion, "Of Túrin Turambar"

Mîm was one of the last Petty-dwarves. He took Túrin and the Gaurwaith into his house in Amon Rûdh in exchange for his life.

Mîm was the captain of the Petty-dwarves who first aided Finrod Felagund in his building of Nargothrond. However, they were expelled after Mîm attempted to murder Felagund in his sleep.[2] 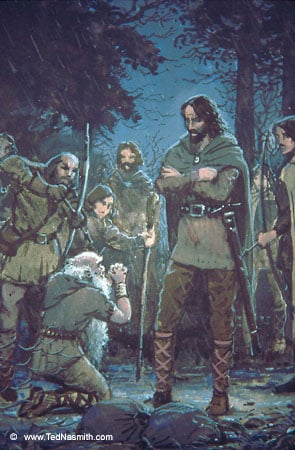 Mîm Pleads For His Life by Ted Nasmith

Later in life, Mîm lived with his two sons at Amon Rûdh in middle Beleriand, where he kept a secret treasury.

During Túrin's time with the Outlaws, Mîm and sons were seen as they snuck past the outlaws carrying heavy sacks. Mîm was captured, and arrows were shot at his sons Ibun and Khîm. In exchange for his life, Mîm was forced to lead the outlaws to his secret halls in Amon Rûdh. There, it turned out Khîm had been killed by an arrow, and Túrin repenting offered his service to Mîm. For this reason Mîm tolerated the outlaws, and eventually even took a liking to Túrin.[3]

When Beleg Cúthalion arrived at Amon Rûdh, Mîm was angry: he hated Elves, especially the Sindar. Nevertheless he had to tolerate the Elf in his halls.[3] After he betrayed Amon Rûdh to Morgoth under the promise that Túrin would not be harmed, Mîm somehow escaped, but it seems Ibun was killed by Orcs.[4] In F.A. 499, Mîm made his way to Nargothrond after Túrin had killed Glaurung, and he took the treasure for his own.[5]

In 502,[5] Húrin Thalion, who had seen all that had happened to Túrin with Morgoth's eyes, came across Mîm in Nargothrond, and killed him, deeming him partially responsible for Túrin's fate. With his dying words Mîm cursed the treasure. After this, Húrin brought the Nauglamír to Doriath, which directly led to the Second Kinslaying and the death of Thingol.[6]

In earlier versions of the legendarium, Mîm was a much more evil character, who actively betrayed Túrin.[7] But as Dwarves gradually changed in Tolkien's writings from evil Orc-like beings to the Dwarves they later became, Mîm's character was changed, and in the final texts he is no longer a true villain, but almost a tragic character in his own right.

Tolkien wrote a poem and short narrative titled The Complaint of Mîm the Dwarf, but it was not dated, so it is unknown where it should be placed in the legendarium. There it is implied that Mîm used to live near Tarn Aeluin in Dorthonion until Men came and drove him out, stealing his belongings in the process.[8] As such, the aging and bitter Mîm (said to be at least 200 years old) resides in a cave in a mountain, far from any civilization. He was still able to create works of decent craftmanship, but he had lost his former skill. He struggled with not being able to forgive; the act of forgiving seemed impossible to him, although this would have perhaps enabled him to restore some of his former skill.[1]