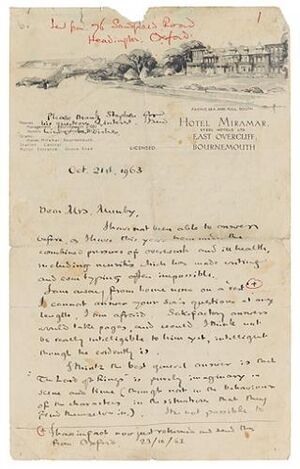 The letter is long, but in one place reads as follows: 'There must have been orc-women. But in stories that seldom if ever see the Orcs except as soldiers of armies in the service of the evil lords we naturally would not learn much about their lives. Not much was known'. Tolkien also goes on to discuss the use of the word 'goblin': 'In The Hobbit 'goblin' is used... but goblin is a fairly modern word, and very vague in its application to any sort of bogey in the dark.'

Blaming "the combined pressure of overwork and ill health" for his late response, Tolkien notes that "satisfactory answers" to Stephen Munby's questions "would take pages, and would I think not be really intelligible to him". Tolkien therefore suggests:

"...the best general answer is that "The Lord of the Rings" is purely imaginary in scene and time (though not in the behaviour of the characters in the situations that they find themselves in). It is not possible to represent an "imaginary" world, and have answers for all the questions that may be asked about it..."
Noting that Stephen Munby's questions are mainly concerned with "ancient history", Tolkien states his "points will all be made clearer when (if ever) I have time to complete and publish the legends of the earlier ages". The author then states his ideas of imaginary history and the layers of history behind this and, thereby, provides AN EXAMPLE OF HIS TREATMENT OF MYTHS AND HISTORY:
"...The references (such as Morgoth etc.) do refer to stories actually written, but in this tale they only appear in order to give the tale a 'place' in an imaginary history. Perhaps this could be understood by a comparison with real 'history'. Supposing a story was written in which the climax was the tragedy of the Battle of Hastings. It would be about the behaviour of the chief characters such as Harold and William, but there might be references to older history (at more than one remove) say to the death of Arthur, or the coming of the English when they were the invaders, and even far away to the legendary North from which they came, and to their struggle with the Danes (from whom William was descended) or to their old pagan gods. But it would be impossible to provide answers for such references except by writing more books!"
Tolkien then confesses he does not enjoy "stories of an imaginary world that have not got any imaginary history". Returning to The Lord of the Rings, Tolkien notes "...the story is really about Death and pity and Self-sacrifice" and comments on the apparent absence of God in the book.

There then follow eight numbered replies to original questions that concern actual history, use of Old English for the language of the Rohirrim, Satan ("Sauron was one of the lesser spirits who had at one time served him..."), the "ultimate history of Men", orc-women, the invention of the name "orc" ("...in The Hobbit 'goblin' is used... but goblin is a fairly modern word, and very vague in its application to any sort of bogey in the dark...") and high-elves, etc.