Nár was an old Dwarf, the sole companion of King Thrór when he set out to wander in the wilds of Middle-earth.

Virtually nothing is known of Nár. However what is known is that he set out with the King of Durin’s folk from Dunland, where the Thrór's following of relatives and subjects were living at the time to find his fortunes in wider world. Their journey eventually brought them to the old dwarf-halls of Moria, now infested with Orcs and Trolls. Disregarding the pleas of Nár, Thrór insisted on entering Khazad-dûm while Nár stayed behind and waited for the king not far from the gate.

That was the last any Dwarf ever saw of Thrór alive. He was beheaded by the Orcs, and their chieftain Azog branded his own name on Thrór's brow. The Orcs allowed Nár to live so he could return to Thrór's son Thráin II, with a message that Azog now ruled in Moria, and that Dwarves best stay away lest they suffer the same fate.

Nár returned to Dunland where his message caused such anger amongst his people that it raised a call to arms among all seven Dwarf Houses to avenge the elder high-king of their race, leading the War of the Dwarves and Orcs. In the climactic Battle of Azanulbizar, Azog himself was slain along with thousands of others on both sides.[1] 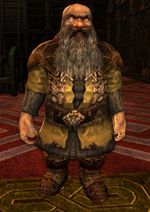 Nár in The Lord of the Rings Online

Nár is a dwarf from the Dvergatal. His name means "Corpse".[2]

Nár, now an elderly dwarf with bad eyesight and even worse memory, is living in Zudrugund, a settlement of Longbeard exiles from Erebor in Dunland that was abandoned when Thorin Oakenshield led his people to Ered Luin. Nár stayed behind and his elder years is now being looked after by Frithgeir, the only other dwarf in these lands.
When the player is imprisoned in Orthanc, Saruman taunts them that he had observed their movements for a long time and claims to have killed Nár after his usefulness came to an end. After escaping the captivity, the player checks back on Nár and Frithgeir and discovers that Saruman had lied. After the Siege of Erebor, the new King Thorin III Stonehelm learns from the player that Nár is still alive and invites the old friend to live the rest of his days in peace under the halls of the Lonely Mountain.