Of Túrin Turambar is the twenty-first chapter of the Quenta Silmarillion section within The Silmarillion.

After Morgoth's decisive victory in the Nirnaeth Arnoediad, he granted Hithlum to the Easterlings who oppressed and enslaved the remaining people of Hador. Húrin's pregnant wife, Morwen, and young son, Túrin, remained in Dor-lómin. Fearing that Túrin would be enslaved, Morwen secretly sent her son away to the kingdom of Doriath, hoping that King Thingol would harbour the son of Húrin. She gave birth to a daughter, Nienor, after Túrin's departure.

Túrin was admitted into Doriath and Thingol raised him as an adopted son. During this time, messengers from Doriath contacted Morwen, but she would not leave her home and, after nine years, contact was eventually lost. Túrin, fearful for his mother and sister, asked for Thingol's permission to join Beleg Cúthalion in the fight against the Orcs of Morgoth at the borders of Doriath.

Upon Túrin's return to Doriath after three years of fighting in the wild, he was mocked by Saeros, a counselor of Thingol who was envious of the special treatment Túrin was given. In response to the insults, Túrin accidentally caused the death of Saeros and he fled from Doriath, fearing the repercussions for what he had done. 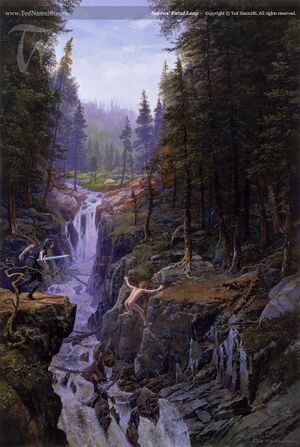 However, Thingol saw that Túrin was wronged and wished for him to return. Beleg set out in search of his friend Túrin, hoping to bring him back to Doriath. After a year, Beleg finally found him leading a band of outlaws in the wilderness, but, despite the King's pardon, he refused to return. Beleg returned to Thingol alone, but asked for leave to go back to Túrin and stay with him as a guide and guard. Thingol agreed and gifted him the black sword called Anglachel.

Meanwhile, Túrin and his band of outlaws came across three Petty-dwarves, capturing one named Mîm and shooting an arrow at the others as they fled. As ransom for sparing his life, Mîm offerend to bring them to his hidden home on the hill of Amon Rûdh. Túrin accepted, but soon learned that the arrow had killed one of Mîm's sons. He repented, offering to pay a ransom of gold for Mîm's loss, and his group proceeded to live in the Dwarf's home. Mîm learned to tolerate the outlaws and eventually took a liking to Túrin.

When Beleg arrived again, Túrin would still not return to Doriath, so Beleg remained and the outlaws were grateful for his aid. Mîm, however, hated the Elf and began to seclude himself from the group. Together, Túrin and Beleg fought against the forces of Morgoth and the Orcs feared them. The area they guarded became known as the Land of Bow and Helm, named for Beleg's weapon and the famous Helm of Hador that Túrin wore into battle. Their fame spread far and many more joined their company, but word of their deeds also came to Morgoth and the son of Húrin was revealed to him.

Amon Rûdh became encircled by spies and eventually the Orcs of Morgoth found Mîm and took him captive. The petty-Dwarf was, once again, forced to lead his captors to his hidden house. The Orcs came in the night, taking Túrin's company by surprise. Many were killed while they slept, but Túrin was captured and taken away.

Beleg, alive but wounded, angrily attacked Mîm for his betrayal, but the Dwarf fled. Following the tracks of the Orcs, Beleg set out in search of Túrin. He tracked them through the corrupted forest of Taur-nu-Fuin where by chance he came upon Gwindor, the Noldo Elf who had not been seen since his charge in the Nirnaeth Arnoediad. However, Gwindor was a shadow of his former self and Beleg learned that he had been enslaved after their defeat in battle and had been wandering lost in the forest since escaping.

The two elves continued searching for Túrin together until they finally came upon an Orc encampment. Sneaking into the camp, they found Túrin bound and asleep, and carried him a short distance away. Beleg drew his sword Anglachel to cut Túrin's shackles, but it slipped and pricked Túrin's foot. Suddenly awake and afraid in the darkness, Túrin believed he was being attacked by the Orcs. He seized the sword from Beleg and slew him.

Túrin stood shocked and silent when he realized that he had killed his friend. Gwindor led him away, but still Túrin would not speak until Gwindor had him drink from the waters of Eithel Ivrin, and his tears were unleashed as he came to his senses. Introducing himself, Gwindor explained that he was a lord of Nargothrond until his capture and enslavement. Then Túrin followed him to Nargothrond, bringing Beleg's sword Anglachel with him.

In Nargothrond, Túrin did not give his real name, but over time he earned the respect of many people, including Orodreth, the king. Anglachel was reforged and, wielding it in battle, Túrin became known as Mormegil, the Black Sword. His prowess in warfare was renowned among the Elves and feared by the Orcs.

Finduilas, daughter of Orodreth, who had once loved Gwindor before his capture, grew to love Túrin instead, though Túrin was unaware. Gwindor warned Finduilas about the dark doom lying on the man she now loved, who was actually Túrin, son of Húrin, cursed by Morgoth. When Túrin found out that Gwindor had revealed his real name he became angry, but Gwindor argued that Túrin's doom lies on him, not his name. 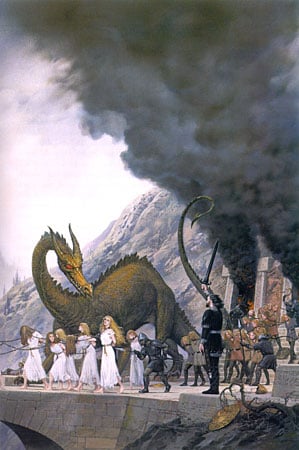 With Túrin's true identity revealed to Orodreth, he became a counselor to the king and advised that Nargothrond turn from its secrecy and fight more openly. Following Túrin's advice, a bridge was built from the city to allow faster movement of their forces. Morgoth's servants were driven out of the area and his attention turned to Nargothrond.