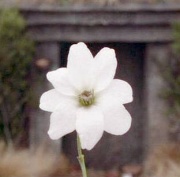 Simbelmynë in The Lord of the Rings: The Two Towers

Simbelmynë was a small white flower that grew in particular abundance on graves and tombs, like the Barrowfield of the Kings of Rohan beneath the walls of Edoras[1]; and most thickly on the grave of Helm Hammerhand.[2] It was referred to as uilos when Tuor saw these flowers in the great ravine between the Fourth Gate, the Gate of Writhen Iron, and the Fifth Gate that was made of white marble, when he was making his way to Gondolin.[3] Another Elven name for this flower was alfirin, which grew on the low mound that was the tomb of Elendil upon the summit of Amon Anwar.[4]

It grew in turf but small and white like the wood anemone. Though the plant bloomed at all seasons, its flowers were not 'immortelles'.[5]

Simbelmynë was the name of the flower in Rohan, meaning "Evermind",[1] a reference to the memories of the dead on whose tombs the flower grew. The name thus resembles 'forget-me-not', but a quite different kind of flower is intended. The Elves called them uilos and alfirin.

The spelling does not appear to be completely fixed. Within The Lord of the Rings, and in most other sources, its name is spelt simbelmynë. However, there is at least one recorded instance where Tolkien prefers symbelmynë.[6] These variations do not affect the meaning of its name.

It has been suggested that Tolkien derived simbelmynë from the Old English words simbel ("ever") and myne ("mind").[7]

Tolkien mentioned that Simbelmyne is an imagined variety of anemone. In appearance, Tolkien compares Simbelmynë to the European anemone, a small white flower growing among the grass or Anemona pulsatilla, the "pasque flower"[5].