Túrin among the Outlaws is the sixth chapter of The Children of Húrin.

Túrin departed from Doriath thinking he was an outlaw, and so came to the woods of Teiglin near Brethil where he was ambushed by a band of outcasts – exiles of the House of Hador called the Gaurwaith or Wolf-men. Feeling a comradeship with these men he joined their ranks under the leadership of Forweg, raiding the lands about and calling himself Neithan, the Wronged. 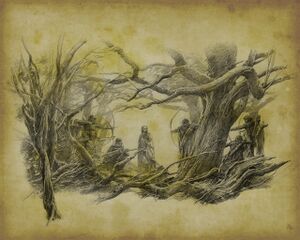 Túrin is surrounded by the Outlaws by Alan Lee

That spring Forweg and his friend Andróg were off to raid a farmstead and Túrin was alone in the wood. To Túrin's shock, a woman sprang screaming into the clearing where he now stood – and in a stroke Túrin hewed the man who was hunting her, only to find it was Forweg. Andróg rushed forth through the thicket but halted in disbelief to see his friend and leader dead and blooded; Túrin, enraged, asked why they hunted this woman, but Andróg laughed, "Outlaws know no law but their needs." But Túrin could not agree and gave the woman her freedom.

On their return to the outlaw's camp, Túrin challenged all the men for the leadership of the band but none dared measure their skill with Túrin's own and so he became their chief, taking them south.

Thingol, the Elven King of Doriath, had set Beleg the task to discover his friend Túrin when Túrin had left the elven domain, but a weary year had passed before Beleg heard tell of a tall and lordly man who had rescued a girl from the clutches of the outlawed Gaurwaith. In following Túrin he was ever a step behind, for Túrin had learned the wood-craft of Beleg well and the trail was well hidden.

It was now that Morgoth's power was ever spreading southward, and his Orcs were crossing the Brithiach and searching out the lands. Such a band came near the camp of Túrin who were hid in a cave, and as he and Orleg scouted their force, they were discovered and hunted westward toward the wilds of Nargothrond. There Orleg was slain but Túrin escaped and it was a long road to return to the outlaw's cavern. 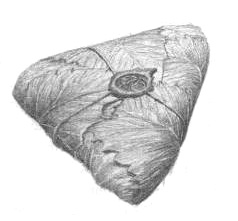 When he returned, there he found Beleg tied roughly to a tree, for the elf's task was accomplished and he had discovered the Gaurwaith's cave. But they had taken him forcefully to await Túrin's judgement, not believing Beleg's tale of friendship with their leader, Neithan. Now Túrin was glad to see his friend, but he would not return to Doriath even with the news of his pardon, for he was over proud.

So, heavy-hearted, Beleg returned to Menegroth with tidings of Túrin, and there Melian was kind in her words and gifted Beleg a leaf-wrapped parcel of lembas, the Elven Waybread that she granted he might give any as a gift of the Queen of Doriath.