The Childhood of Túrin

The Childhood of Túrin is the first chapter of The Children of Húrin.

Húrin was born to Galdor and Hareth, and was the older brother to Huor. In young adulthood, Húrin and Huor were involved in an orc skirmish where they were overrun. They were saved by the grace of Ulmo and taken by eagles to the hidden city of Gondolin where they stayed for a year and learned of Elven lore. They soon yearned for their own people and were given leave to return to their homeland; however they were forced to swear an oath never to reveal the secrets of Gondolin.

On his return, Húrin married Morwen, and shortly after Túrin and Lalaith were born. 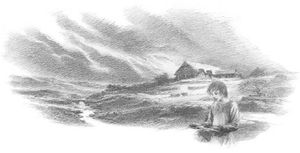 The Childhood of Túrin by Alan Lee

As Túrin grew up he was loved less than his sister and matured quickly; he had a fierce temper much like his father but was also quick to pity. Sorrowfully, Lalaith was soon consumed by the Evil Breath and perished, though her beauty was not forgotten.

Húrin was little at home, and Morwen was stern with her children, so Túrin looked toward his friend Sador for comfort, who was also called Hopafoot as his foot had been lost to an axe stroke gone awry. Sador was a lowly servant from whom Túrin learned much that he perhaps should have gathered from his mother; but she was a strong woman and cool in her emotions.

As the Great Enemy grew, Húrin set out to wage war at the Nirnaeth Arnoediad leaving his family.