The Children of Húrin, also known as Narn i Chîn Húrin: The Tale of the Children of Húrin, is a novel based on J.R.R. Tolkien's writings, edited by his son Christopher Tolkien and published in 2007. The main text had been previously published as "Narn i Hîn Húrin" in Unfinished Tales, here edited by Christopher to form a consistent narrative as an independent work. First and most subsequent editions were illustrated by Alan Lee.

The plot consists in the expanded account of the story of the wanderings and deeds of Túrin Turambar, son of Húrin, and his sister Niënor, in their struggle against fate (and the curse cast upon Húrin's kin). It is considered to be among the darkest examples of any of Tolkien's works. 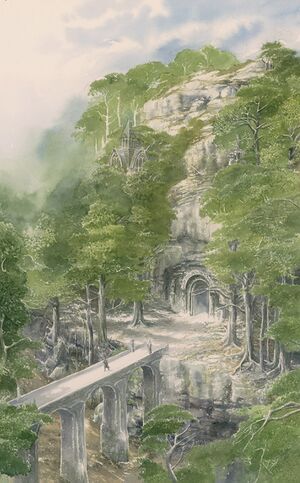 Narn I Chîn Húrin: The Tale of the Children of Húrin

A brief version of the story formed the base of Chapter 21 of The Silmarillion, setting the tale in the context of the wars of Beleriand. Although based on the same texts used to complete the new book, Christopher Tolkien abridged the tale to avoid overcharging his edition.

Other incomplete versions have been published in previous publications:

It has seemed to me for a long time that there was a good case for presenting my father's long version of the legend of the Children of Húrin as an independent work, between its own covers, with a minimum of editorial presence, and above all in continuous narrative without gaps or interruptions, if this could be done without distortion or invention, despite the unfinished state in which he left some parts of it.
—Christopher Tolkien