The Coming of Túrin into Brethil

The Coming of Túrin into Brethil is the thirteenth chapter of The Children of Húrin.

After leaving Dor-Lómin, Túrin travelled southwards towards Sirion. He saw two choices before him, should he seek his mother and his sister? Or should he continue his desperate plight to find the party of Orcs which had taken his love, Finduilas captive. However he knew that by such time, both Morwen and Nienor should have reached Doriath and were safe within the Girdle of Melian.

Therefore Túrin continued his search for Finduilas; he travelled through the woods besides Ered Wethrin, and through all the roads that went north to the Pass of Sirion waiting to attack the Orcs holding Finduilas captive. Upon finding that all of trails had been washed away, he passed down the river Teiglin. It was along this path which Túrin stumbled across some of Haleths people, who dwelt within the Forest of Brethil. 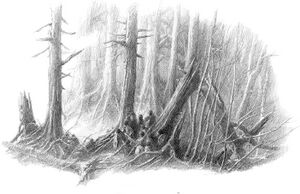 The Woodmen of Brethil by Alan Lee

Túrin arrived to see a group of these woodmen surrounded and outnumbered by Orcs; they defended themselves desperately. In the mean time, Túrin devised a cunning plan to fool and scare off the Orcs. Making a great deal of noise, Turin stumbled through the tree and shouted orders as if he were leading a group of armed men. When Túrin jumped out before the Orcs, many instantly fled; the ones that were left soon scattered too, for they saw and knew fore-well the tale of Gurthang, Túrin's blade.

Even the woodsmen believed Túrin led a party of men, and upon discovering the truth they laughed and thanked Túrin. Dorlas, the leader of these men, offered Túrin a place amongst them; declining he told Dorlas of his quest to find Finduilas. Morosely, Dorlas told Túrin of how they ambushed a slow moving group of Orcs who had many captives; he told him of how the Orcs killed their captives as soon as they were assailed. He also told Túrin of how he knew Finduilas had been killed in particular, as he had spoken with her whilst she lay dying, against a tree with a spear thrust through her.

Túrin demanded they take him to her burial mound. In grief he realized the courage of the House of Hador; he declared that he should from now on be called Turambar, "Master of Doom", and that he was to live with the woodmen in the forest of Brethil. He also stated that he should never-more take Gurthang into battle, instead wielding a bow and a spear.