The Death of Túrin

The Death of Túrin is the eighteenth and final chapter of The Children of Húrin.

Before sunrise, Túrin woke up and was surprised to see his bandaged hand, as he was alone in the middle of the dragon's devastation. He then headed to Nen Girith, wishing to return home as soon as possible, but on the way he encountered the people of Brethil who were coming to bury his body. All of them were afraid, and explained that Brandir had told them that Túrin was dead after slaying the dragon. 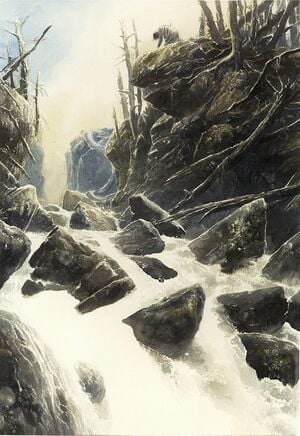 The Death of Túrin by Alan Lee

Túrin then asked for Níniel, and Brandir told him she was dead. Some of the people believed that Brandir was lying, because in his madness he said that Túrin's death was good news. Full of anger, Brandir told Túrin everything he had seen and heard, that Turambar and Níniel were actually both children of Húrin. Túrin refused to believe him, and in his anger killed Brandir with his sword Gurthang.

But doubt tormented him, and he decided to go to Doriath, where he thought his mother and sister were. On the way he stopped at Haudh-en-Elleth, and there he was found by Mablung and his elves. The captain was happy to see Túrin, and explained that he was coming there after hearing that Glaurung was entering Brethil. Túrin answered that the dragon was already dead by his hand, and asked Mablung about Morwen and Niënor, as he had heard that they left Dor-lómin and lived now in Menegroth. Mablung told what happened years ago: both left Doriath to look for him in Nargothrond, but were lost because of Glaurung.

Túrin lamented and described his sister as he always thought she would be, with black hair like her mother. But Mablung corrected him, and explained that Niënor was blonde and blue-eyed, like her father. Finally Túrin realised the truth and cried in despair. Running away from Mablung and his men, he came into Cabed Naeramarth. There, unwilling to jump into the same waters where his sister died, he instead took his black sword and killed himself with it. 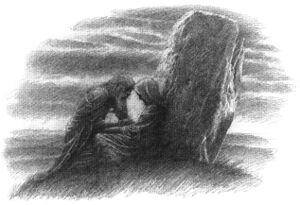 The Death of Morwen by Alan Lee

The two groups of Men and Elves met there, finding the bodies of Glaurung and Túrin. Glaurung's was cremated, but Túrin was buried with honour with his sword Gurthang, which was broken with Túrin's death. Above the mound a great stone was put and there was written with the runes of Doriath: "TÚRIN TURAMBAR DAGNIR GLAURUNGA", and behind it "NIËNOR NÍNIEL", although she was not buried there.

As the curse was fulfilled, Morgoth allowed Húrin to leave Angband. He wandered among Beleriand until he finally reached Brethil and his children's grave. There he found his wife Morwen. She asked what had happened to their children, but he did not answer, and she died in his arms.