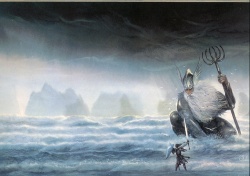 The Horns of Ylmir is a poem first written by J.R.R. Tolkien in 1914, and published in The Shaping of Middle-earth, as an appendix to "The Quenta".[1]

The title refers to the Ulumúri, the conches of Ulmo that give the sea-music and cause sea-longing.

The first version of the poem was titled The Tides and dated 4 December, 1914. It was written after Tolkien's visit to the Lizard Peninsula in Cornwall, in the summer of 1914, where the sea left a great impression on him.[2]

The second version bears the title Sea Chant of an Elder Day (Fyrndaga Sœléoþ in Old English) and the date March 1915. It has some minor emendations, and already has a prose prologue alleging the song was made by Tuor for his son Eärendel in the Land of Willows.

In the third revision, the title indicated it was a song "from the Fall of Gondolin", therefore it should have been published in The Book of Lost Tales Part Two. Only a few small emendations were made, like changing the name Ulmo to Ylmir (the Gnomish translation of Ulmo) and including references to Ulmo and Ossë within the poem.[1]

"Tuor recalleth in a song sung to his son Eärendil the visions that Ylmir's conches once called before him in the twilight in the Land of Willows."

'Twas in the Land of Willows where the grass is long and green—
I was fingering my harp-strings, for a wind had crept unseen
And was speaking in the tree-tops, while the voices of the reeds
Were whispering reedy whispers as the sunset touched the meads
Inland musics subtly magic that those reeds alone could weave
'Twas in the Land of Willows that once Ylmir came at eve.
In the twilight by the river on a hollow thing of shell
He made immortal music, till my heart beneath his spell
Was broken in the twilight, and the meadows faded dim
To great grey waters heaving round the rocks where sea-birds swim.

I heard them wailing round me where the black cliffs towered high
And the old primeval starlight flickered palely in the sky.
In that dim and perilous region in whose great tempestuous ways
I heard no sound of men's voices, in those eldest of the days,
I sat on the ruined margin of the deep-voiced echoing sea
Whose roaring foaming music crashed in endless cadency
On the land besieged for ever in an aeon of assaults
And torn in towers and pinnacles and caverned in great vaults;
And its arches shook with thunder and its feet were piled with shapes
Riven in old sea-warfare from those crags and sable capes.

Lo! I heard the embattled tempest roaring up behind the tide
When the trumpet of the first winds sounded, and the grey sea sang and cried
As a new white wrath woke in him, and his armies rose to war
And swept in billowed cavalry toward the walled and moveless shore.
There the windy-bannered fortress of those high and virgin coasts
Flung back the first thin feelers of the elder tidal hosts;
Flung back the restless streamers that like arms of a tentacled thing
Coiling and creeping onward did rustle and suck and cling.
Then a sigh arose and a murmuring in that stealthy-whispering van,
While, behind, the torrents gathered and the leaping billows ran,
Till the foam-haired water-horses in green rolling volumes came—-
A mad tide trampling landward—and their war-song burst to flame.

Huge heads were tossed in anger and their crests were towers of froth
And the song of the great seas were singing was a song of unplumbed wrath,
For through that giant welter Ossë's trumpets fiercely blew,
That the voices of the flood yet deeper and the High Wind louder grew;
Deep hollows hummed and fluted as they suck the sea-winds in;
Spumes and great white spoutings yelled shrilly o'er the din;
Gales blew the bitter tresses of the sea in the land's dark face
And wild airs thick with spindrift fled on a whirling race
From battle unto battle, till the power of all the seas
Gathered like one mountain about Ossë's awful knees,
And a dome of shouting water smote those dripping black facades
And its catastrophic fountains smashed in deafening cascades.

Then the immeasurable hymn of Ocean I heard as it rose and fell
To its organ whose stops were the piping of gulls and the thunderous swell;
Heard the burden of the waters and the singing of the waves
Whose voices came on for ever and went rolling to the caves,
Where an endless fugue of echoes splashed against wet stone
And arose and mingled in unison into a murmuring drone—-
'Twas a music of uttermost deepness that stirred in the profound,
And all the voices of all oceans were gathered to that sound;
'Twas Ylmir, Lord of Waters, with all-stilling hand that made
Unconquerable harmonies, that the roaring sea obeyed,
That its waters poured off and Earth heaved her glistening shoulders again
Naked up into the airs and cloudrifts and sea-going rain,
Till the suck and suck of green eddies and the slap of ripples was all
That reached to mine isléd stone, save the old unearthly call
Of sea-birds long-forgotten and the grating of ancieng wings.

Thus murmurous slumber took me mid those far-off eldest things
(In a lonely twilit region down whose old chaotic ways
I heard no sound of men's voices, in those eldest of the days
When the world reeled in the tumult as the Great Gods tore the Earth
In the darkness, in the tempest of the cycles ere our birth),
Till the tides went out, and the Wind died, and did all sea music's cease
And I woke to silent caverns and empty sands and peace.
Then the magic drifted from me and that music loosed its bands—
Far, far-off, conches calling—lo! I stood in the sweet lands,
And the meadows were about me where the weeping willows grew,
Where the long grass stirred beside me, and my feet were drenched with dew.
Only the reeds were rustling, but a mist lay on the streams
Like a sea-roke drawn far inland, like a shred of salt sea-dreams.
'Twas in the Land of Willows that I heard th' unfathomed breath
Of the Horns of Ylmir calling—and shall hear them till my death.