The Lord of the Rings: The Rings of Power

(Redirected from The Lord of the Rings (TV series))

The Lord of the Rings: The Rings of Power, otherwise known unoficially as The Lord of the Rings on Prime, is an online television series and it is based on the writings of J.R.R. Tolkien. It is created and produced by Amazon Studios working alongside the Tolkien Estate, The Tolkien Trust, HarperCollins and New Line Cinema. Set in the Second Age of Middle-earth,[1] it explores new storylines preceding J.R.R. Tolkien's The Fellowship of the Ring.[2] The story spanning across thousands of years is condensed into a single point in time to avoid time jumps.[3] The first two episodes were released on 1 September of 2022[4], although they were originally scheduled to be released on 2 September of the same year.[5]

Amazon Studios' forthcoming series brings to screens for the very first time the heroic legends of the fabled Second Age of Middle-earth's history. This epic drama is set thousands of years before the events of J.R.R. Tolkien’s The Hobbit and The Lord of the Rings, and will take viewers back to an era in which great powers were forged, kingdoms rose to glory and fell to ruin, unlikely heroes were tested, hope hung by the finest of threads, and the greatest villain that ever flowed from Tolkien's pen threatened to cover all the world in darkness. Beginning in a time of relative peace, the series follows an ensemble cast of characters, both familiar and new, as they confront the long-feared re-emergence of evil to Middle-earth. From the darkest depths of the Misty Mountains, to the majestic forests of the elf-capital of Lindon, to the breathtaking island kingdom of Númenor, to the furthest reaches of the map, these kingdoms and characters will carve out legacies that live on long after they are gone.
—Official synopsis[6]

The showrunners said that they wish to "come up with the novel Tolkien never wrote and do it as the mega-event series".[3] They explained that they only have the copyrights to adapt The Hobbit and The Lord of the Rings along with its Appendices, without the rights to The Silmarillion, Unfinished Tales or other books that contain the vast majority of Tolkien's writings on the Second Age.[7] 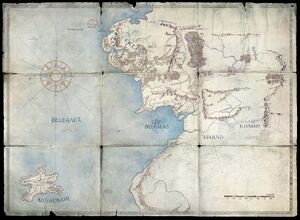 Fourth map of Middle-earth, released by Amazon on 6 March 2019

In November 3 2017, it was reported that Amazon Studios were in discussion with Warner Bros. Television and the Tolkien Estate about developing a series based on The Lord of the Rings.[34] Later, in November, Amazon Studios announced they have secured the rights to develop a multi-season television series set in Middle-earth with the potential for spin-offs.[35] The rights have been said to have cost close to $250 million.[36] Amazon Studios would cooperate in the production with the Tolkien Estate, The Tolkien Trust, HarperCollins and New Line Cinema.[36]

On 13 February 2019, Amazon's then newly created Twitter account associated with the show posted the quote "I wisely started with a map.", taken from Tolkien's Letter 144.[37] On 15 February the Twitter account released a map of Middle-earth along with a line of the Ring Verse, over the next few weeks different versions of the map were released with each successive one including more labels than the previous as well as more lines from the verse. On 7 March the final map was released which showed a wider view of Middle-earth, including the island of Númenor and the final post "Welcome to the Second Age".[1] Tom Shippey and artist John Howe had worked on the accuracy of the maps, however dedicated fans had detected several mistakes and anachronisms.[38]

The fact the series were going to be set in the Second Age was predicted by Tolkien Society Chair Shaun Gunner in February.[39]

On 17 September 2019, Amazon Studios announced that the series first season would be filmed in New Zealand.[2]

On 18 November 2019, Amazon Studios Head Jennifer Salke announced that the series has been renewed for a second season.[42]

Due to the COVID-19 pandemic, production of the series first season was suspended.[43] On 9 May 2020 the New Zealand Film Commission has allowed the production of film and TV to continue in the country.[44]

In December 2020, Bryan Cogman left the series for Entertainment One, after completing work on the scripts for season one.[45]

On 24 March 2021, Amazon Studios announced that Wayne Che Yip had joined the creative team, as both a co-executive producer and director.[46]

On May 2021, it was announced that Charlotte Brändström would direct another two episodes.[47]

On September 2021, it was reported that Howard Shore and Bear McCreary were in talks to compose the soundtrack for the series.[48] In July 2022, it was officially announced their hiring, with McCreary announced to be composing the score and Shore to be writing the main title theme.[49]

On 3 October 2022, production for the second season of the series begun in the United Kingdom.[50]

On 22 July 2019, it was reported that Amazon has made its first cast for the new series that Markella Kavenagh was in talks to play a character named "Tyra".[51]

Will Poulter was cast for an unknown role in September 2019[52] however in December it was reported that he left the series due to scheduling conflicts.[53] This was later confirmed by Poulter in an interview.[54] He was replaced by Robert Aramayo who was reported to be playing a character named "Beldor".[55]

In October 2019 it was reported that Maxim Baldry[56] and Joseph Mawle has joined the cast, the latter playing "Oren", the lead villain of the series.[57]

In December 2019 there were reports of Ema Horvath[58] and Morfydd Clark joinining the cast, it was said that Clark is to play a "young Galadriel".[59]

In March 2021, Tom Budge announced that he had departed the series after filming several episodes. He explained that Amazon had decided to go in a different direction with his character after reviewing the first episodes.[62] 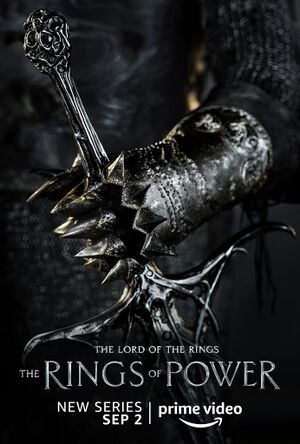 One of the promotional posters released on February 2022

It was reported that the TV series was one of seven film and television productions that were granted exemptions to allow cast and crew members to enter New Zealand while its borders were closed to non-New Zealanders due to COVID-19. The exemptions were granted before June 18 by Economic Development Minister Phil Twyford, and applied to 93 members of the production as well as 20 family members. Around 10 percent of the series' crew were believed to be non-New Zealanders, and many of them had remained in the country during its pandemic lockdown and did not require exemptions. Pre-production on further episodes began by July 2020,[73] and filming on the series resumed on September 28.[74] Bayona completed filming on his episodes by December 23,[75] with production on further episodes set to begin in January 2021 following a two week break for Christmas.[76] Yip confirmed that he had begun filming his episodes by March,[77] and Brändström was in New Zealand for production on the series when she was announced as director in May.[78]

On 19 January 2022, Amazon revealed of the series' full title. Instead of creating a title reveal with visual effects, the studio released an announcement video in which the letters of the title are physically cast from molten metal while an excerpt of the "Ring Verse" from The Lord of the Rings is read in voiceover. The video was directed by Klaus Obermeyer, who worked with special effects supervisor Lee Nelson under advisement by veteran special effects supervisor Douglas Trumbull.[79][80]

On 3 February 2022, Amazon Studios revealed a series of character posters for the series.[81] On 10 February, a "first look" was revealed with photos of some of the characters,[3] followed by the release of the teaser trailer on 13 February during Super Bowl LVI.[82] The official watch party for the trailer was hosted on YouTube by TheOneRing.net.[83]

On 14 July, Amazon released another trailer for the series online.[84]

On 23 August, Amazon released the final trailer for the first season's series online.[85]