(Redirected from The White Council)

The White Council, also referred to as the Council of the Wise, was a group of the wise in Middle-earth which met irregularly. Its purpose was "to unite and direct the forces of the West, in resistance to the shadow."[4]

The following individuals were clearly stated to have been members of the White Council:

A "White Council" first met in c. S.A. 1701.[note 1] At this meeting it was decided that Imladris should become the stronghold of the Elves in Eriador, rather than Eregion. No members are mentioned explicitly, but it is implied that at least Gil-galad and Elrond were members because Gil-galad gave Vilya to Elrond at that Council. Galadriel and Celeborn were also present at Imladris in that moment.[5] It seems likely that the "White Council" of the Third Age echoed this "White Council" of the Second Age.[6]

In T.A. 2063[2] Gandalf entered Dol Guldur, thus daunting the concealed Sauron into fleeing eastwards, beginning the Watchful Peace; although this was before the formation of the Council, the feat was attributed to them.[7][note 2] 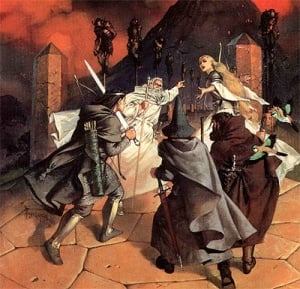 In T.A. 2463,[2] following Sauron's return to Dol Guldur and the end of the Watchful Peace in 2460,[2] Galadriel summoned the first meeting of the White Council.[3]

The White Council meets in Rivendell in The Hobbit: An Unexpected Journey

Having arrived at Rivendell with Thorin and Company, Gandalf met with Elrond, Galadriel, and Saruman. It seems that the Grey Pilgrim was unaware that the meeting would take place. Whilst this meeting is not explicitly called the "White Council," its membership and discussion points have much in common with the White Council in Tolkien's writings. Much of the history of the Third Age is conflated and substantially altered. Gandalf reveals his concerns regarding an alliance between Sauron and Smaug, before telling the Council that Radagast had found Dol Guldur occupied by a Necromancer. Ever begrudging Gandalf, Saruman dismisses Gandalf for believing Radagast's story. Gandalf and Galadriel converse telepathically before the Wizard showed the Council a Morgul blade which belonged to the Witch-king; the blade and Nazgûl had been buried together many centuries previously following the downfall of Angmar. Saruman is still skeptical about the evidence and Radagast's claims and forbids Gandalf to continue his journey. However Gandalf had already arranged for Thorin and Company to leave Rivendell during the meeting, knowing already that Saruman would hinder him out of spite and pride.

Gandalf has been imprisoned and tormented by Sauron and his minion after a failed solo mission to the stronghold of Dol Guldur. Galadriel arrives at the fortress to rescue him, vanquishing the Orc jailor in the process. She and Gandalf are then surrounded by the spectres of the Nazgûl, but Elrond and Saruman arrive on the scene and attack them. Galadriel heals the Grey Pilgrim while their companions battle the Nine. After Gandalf swiftly taken to safety by Radagast. Sauron himself manifests before the council, but Galadriel assumes a dark, ethereal form and overpowers him. The Dark Lord's spirit then flees into the East. Both awed and shaken by Sauron's display of strength, Saruman plays down on Galadriel and Elrond's worries, professedly vowing that he himself would deal with Sauron - foreshadowing his utter corruption.