The Two Trees of Valinor were Telperion and Laurelin, the Silver Tree and the Gold Tree that brought Light to the Land of the Valar in ancient times. They were destroyed by Melkor and Ungoliant, but their last flower and fruit were made by the Valar into the Moon and the Sun. 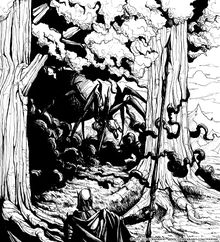 A jealous Melkor enlisted the help of the giant spider-creature Ungoliant (an ancestress of Shelob) to destroy the Two Trees. Concealed in a cloud of darkness, the two of them struck during a high feast. The Unlight of Ungoliant devoured the roots, while Melkor came onto Ezellohar, striking both Trees with his black spear. The sap of the Two Trees poured like blood upon Ezellohar where insatiable Ungoliant sucked it up, devouring whatever life and light remained before draining the Wells of Varda.[2]

The Two Trees of Valinor in The Lord of the Rings: The Rings of Power.

September 1: A Shadow of the Past:

When the Two Trees were said by Galadriel to have been slain by Morgoth, Ungoliant's role is not mentioned. In addition, the method of how Morgoth killed them is not depicted. Rather than being killed by Morgoth with a black spear, the trees instead burn to death under a shadow of Morgoth.