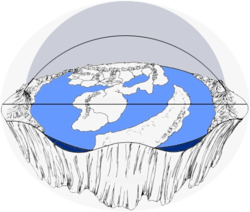 "Behold your Music!"
― Ilúvatar to the Ainur

The Vision of Ilúvatar was the vision of the World created by Ilúvatar through the Music of the Ainur, later given being by him.

And they saw a new World made visible before them, and it was globed amid the Void, and it was sustained therein, but it was not of it. And as they looked and wondered, this World began to unfold its history, and it seemed to them that it lived and grew
—Ainulindale

The Vision showed the result of each mind of the Ainur, and specially Melkor could see the good results that his discord caused against his intentions. The Vision unfolded the history of the new world, and two things amazed most to the Ainur: the water and the Children of Ilúvatar. But the Vision ceased during the Dominion of Men; therefore the Ainur knew many things of the history to come, but about the End they cannot foresee the same way.[1]

After the Vision, the Ainur found themselves in darkness, which they never had experienced. Then Ilúvatar created Eä with his word, so the Ainur could see the world, not as a mere vision, but as true living Creation.