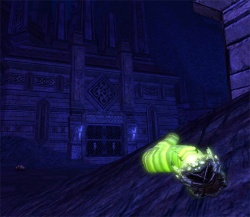 Great glow-worms are said to have crept about the grassy borders of Olórë Mallë, the Path of Dreams.[1]

As these creatures are mentioned only fleetingly, it is impossible to say if they were related to the great Worms (wingless Dragons), or if they were giant versions of regular glowworms. One can assume that they glowed in the dark (and therefore perhaps were related to, or were another name for, the spark-dragons).

Glow-worm is a monster found in the Dark Delvings of Moria and in The Hall of Lights in Mirkwood,[2][3] portrayed as a giant glowworm and classified as "Spiders and Insects Crawler".[4]

Retrieved from "http://tolkiengateway.net/wiki/Great_glow-worms"
Category: Races in The Book of Lost Tales