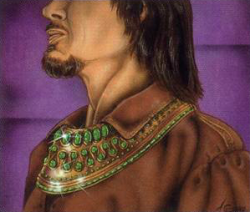 The Necklace of Girion by Audrey Corman

The Necklace of Girion was a marvelous piece of jewelry originally owned by Girion, Lord of Dale. The necklace was studded with five hundred emeralds as green as grass.

Prior to the coming of the dragon Smaug, Girion had traded the necklace to the Dwarves of Erebor in exchange for a coat of dwarf-linked rings wrought of pure silver that was three times as strong as steel. The coat was given to Girion's son.[1] In T.A. 2770 Smaug attacked both Dale and the Kingdom Under the Mountain,[2] and the Necklace became part of Smaug's hoard after the dragon occupied the Lonely Mountain.[1]

After the death of the dragon, the Battle of Five Armies, and the death of Thorin, Dáin II became King under the Mountain and dealt the treasure wisely. Bard, the heir of Girion, returned the Arkenstone to the Dwarves and in the one-fourteenth share given to Bard came the Necklace of Girion. Bard then gave the emeralds to the Elvenking, who was most fond of such gems, in thanks for the aid the Elves had rendered to the Lake-men of Esgaroth.[3]

Originally J.R.R. Tolkien had created the Gem of Girion for The Hobbit so as to provide an easily transportable part of the hoard of Smaug for Bilbo Baggins to carry home. Changing his mind about having Bilbo slay Smaug, Tolkien introduced Bard into the plot. The Gem of Girion turned into the Arkenstone and was made the most coveted part of the treasure for Thorin, and the Necklace of Girion was invented to replace its role in the story.[4]

Thorin Oakenshield finds a necklace of Girion among the hoard of the Lonely Mountain and gloats about how much an elf lord would pay for it. Thranduil claims the necklace is a Elven heirloom however the fate of the necklace is not given in the film.