(Redirected from Eagle and Child) 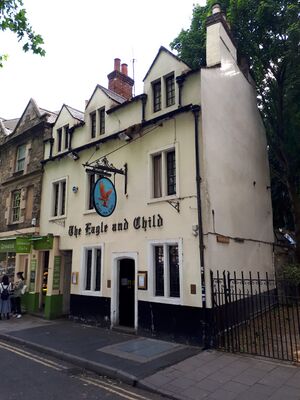 The Eagle and Child, also known as "Bird and Brat" and "Bird and Baby", was the public house in Oxford, England where the Inklings would meet on Tuesday mornings.

The Bird and Baby Inn is Michel Delving's major hub of social activity, and the largest tavern in the Shire. Weary travelers can indulge in food and drink, and share stories of adventures by the fire. The Bird and Baby also offers the services of a barber and healer.

Scene from The Rings of Power TV series.

A scene from the TV series resembles The Eagle and Child signage.