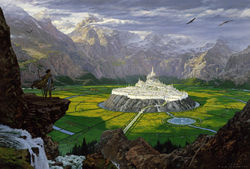 Gondolin was a city in Beleriand founded by King Turgon which became the home of his people for most of the First Age.

Some years after the Exile of the Noldor, Turgon was guided by Ulmo to the hidden valley of Tumladen, and there he founded Gondolin. Turgon's people, who had previously dwelt in Nevrast, travelled there secretly, becoming the Gondolindrim. Also known as the Hidden City, it was concealed from friend and foe alike by the Encircling Mountains, and guarded against trespassers by the Eagles of Thorondor.

The city remained hidden for nearly four hundred years, becoming the last Elven realm to endure against Morgoth, before it was finally discovered through the treachery of Maeglin and besieged. Turgon was lost in the Fall of the city, but some few escaped the destruction and dwelt as Exiles at the Mouths of Sirion.

Featured Quote
“Then when Fingon heard afar the great trumpet of Turgon his brother, the shadow passed and his heart was uplifted, and he shouted aloud: Utúlie'n aurë! Aiya Eldalië ar Atanatári, utúlie'n aurë! The day has come! Behold, people of the Eldar and Fathers of Men, the day has come! And all those who heard his great voice echo in the hills answered crying: Auta i lómë! The night is passing!” 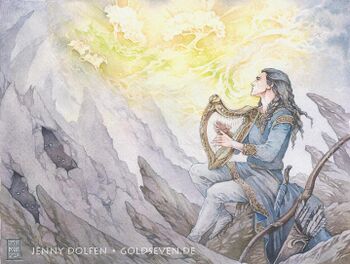 “He sang a song of Valinor” by Jenny Dolfen

Cottage of Lost Play by Amani Warrington
Tolkien Gateway relies on the work of 42 currently active users, working on 55,030 pages to make this wiki the way it is. Since we began, there have been 413,436 edits on this website, and 8,475 user accounts have been created. But sometimes we need a little nudge, so let's work together to improve one of our most popular articles.