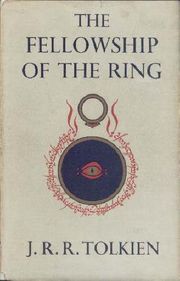 The cover of the 1st edition of The Fellowship of the Ring.

The volume is divided into two books, Book I and II.

The first book sets the stage for the adventure and follows Frodo Baggins as he flees from his home in the Shire to escape the minions of the Dark Lord Sauron. Sauron seeks the One Ring that will allow him to control the Bearers of the nineteen Lower Rings and control the three major races of Middle-earth: the Elves, the Men and the Dwarves. The One Ring has been inherited by Frodo who finds himself unwittingly in the midst of a struggle for world domination. 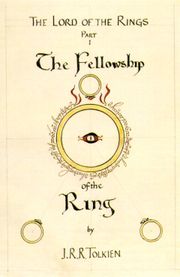 Tolkien's preliminary design for the dust-jacket of The Fellowship of the Ring.

The beginning of the first chapter in the book begins quite lightly, following on from The Hobbit which is more of a childrens story than Lord of the Rings. It begins with Bilbo Baggins celebrating his 111th (or eleventy first, as it is called) birthday, on the same day that Frodo celebrates his 33rd birthday. (His 'coming of age') At the birthday party, Bilbo disappears after his speech, to the surprise of all. Frodo later learns about the ring which he had used to make himself invisible, and also to some of its darker powers.

Heeding the advice of the wizard Gandalf, Frodo leaves his home, taking the Ring with him. He hopes to reach Rivendell, where he will be safe from Sauron, and where those wiser than he can decide what to do about the Ring.

In his journey he is accompanied by three Hobbit friends, Pippin, Merry, and Sam. From the start they are pursued by Black Riders, the Ringwraiths who serve Sauron. Narrowly escaping these and other dangers and meeting other interesting characters en route (e.g, Tom Bombadil) they eventually come to Bree, where they meet Strider, another friend of Gandalf who leads them the rest of the way to Rivendell, through further hardships. Frodo is stabbed upon the mountain of Weathertop by the chief of the Nazgul, with a 'morgul blade' - as part of the knife stays inside him, he gets sicker on the rest of the journey. They also pass the trolls which had been turned to stone, as is told in the The Hobbit. Eventually, they find Glorfindel in the wastes, who directs them to Rivendell. Yet before they can reach there, they are found again by the Ringwraiths, who pursure Frodo to the Ford of Bruinen. Frodo defies them, but the Ringwraiths begin to advance. Yet before they can reach Frodo, a great flood comes and washes them away. Frodo then finally loses consciousness...

Book II chronicles Frodo's stay at Rivendell, where a plan is hatched to destroy the Ring in Mordor. At first Frodo meets his uncle Bilbo Baggins who he had not seen since he left Hobbiton much earlier. Frodo sets forth from Rivendell with eight companions: two Men, Aragorn and Boromir, son of the Steward of the land of Gondor; an Elven prince, Legolas; Frodo's old friend and powerful wizard, Gandalf; Gimli the Dwarf; and Frodo's original three hobbit companions. These Nine Walkers were chosen to represent all the free races of Middle-earth and as a balance to the Nine Riders. They were also accompanied by Bill the Pony, whom Strider and the Hobbits acquired in Bree as a pack horse. Their attempt to cross the Misty Mountains is foiled by heavy snow, so they are forced to take a path under the mountains via Moria, an ancient Dwarf kingdom, now full of Orcs and other evil creatures, where Gandalf falls into the abyss after battling a Balrog.

The remaining eight members of the Fellowship then spend some time in the elf-haven of Lothlórien, where they receive gifts from the elf queen Galadriel that in many cases prove useful later in the quest. They leave Lórien by river, but Frodo begins to realize the Ring is having a malevolent effect on some members of the party, especially Boromir, who tries to take the ring from Frodo. In the process, Frodo puts on the ring to escape him. Later Boromir is attacked by orcs while trying to defend Merry and Pippin. This book ends when Frodo and Sam depart secretly for Mordor and the Fellowship of the Ring dissolves.

Retrieved from "http://tolkiengateway.net/wiki/The_Fellowship_of_the_Ring"
Categories: The Fellowship of the Ring chapters | Books by J.R.R. Tolkien | Publications by title