Roverandom is a story by J.R.R. Tolkien, originally told in 1925.

The story tells of the adventures of the dog Rover who is turned into a toy by the wizard Artaxerxes. Rover goes on adventures to the moon and the bottom of the Deep Blue Sea on his quest to undo his bewitchment.

Tolkien wrote Roverandom for his son Michael to amuse him upon the loss of his favourite toy, a little leaden dog which he lost on a beach. The work is in tone a children's story, but contains many allusions and references in the manner of Farmer Giles of Ham.

It was submitted for publication in 1937 after the success of The Hobbit, but was not published for over sixty years, finally being released in 1998, edited by Christina Scull and Wayne G. Hammond. Roverandom was included in the collection Tales from the Perilous Realm from its 2008 reprinting onwards. 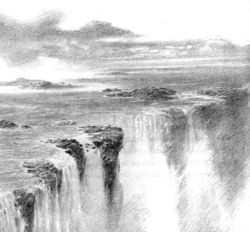 After returning to England (but not Psamathos's cove), Artaxerxes restores Roverandom to his normal size. Roverandom is sent to walk home all by himself but when he gets back to the old lady's house he discovers boy Two playing in the garden with his yellow ball: the old lady was the grandmother of boy Two. Afterwards, Roverandom lives with boy Two in the house by the beach and over many years became good friends with Psamathos. 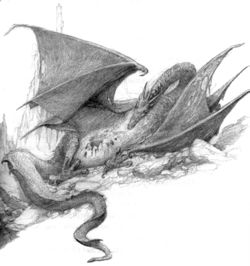 Most reviews from the general press offered modest praise, with more enthusiastic acclaim from Tolkien aficionados; reviewers particularly lauded Tolkien's descriptive ability. Tolkien scholar David Bratman praised Roverandom saying "Mum is not the word for Roverandom: this book can be enjoyed by anyone who loves The Hobbit, from the most abstruse Tolkien scholar to intelligent children of perhaps age 8 or 10." Although admitting that this was a less-polished work by Tolkien, Bratman did confirm that "Some of the best writing is in lyrical descriptions of the moonscape and seascape."[5] Jessica Yates, writing in Books for Keeps, pointed out the connections between Roverandom and both The Silmarillion and other children's stories from the 1920s. Yates concluded that Roverandom is "a jolly good children's tale" with a "scholarly and most useful introduction".[6]

Writing for January Magazine, David Grayson also praised the descriptions - particularly the "sense of awe" - of Roverandom's world and felt this would be a good book to introduce children to Tolkien. However, Grayson also made clear that this was a "mediocre tale".[7] Trent Walters felt that the editorial content was "tastefully done" and summarised the book: "Whether Roverandom will become a classic or not is up to the future generations of young readers and what they remember loving and what they choose to read to their own kids. But, if you're just looking for an unalloyed, unmolested good time to read aloud to your children (or your make-believe children), call up this book."[8]

Daniel Offer of Fantasy Book Review offered cautious praise of Roverandom giving it a 7/10 score: "While Roverandom will probably never be listed among the great classics, this theme rings true, making the book a valuable addition to any library." But Offer did caution that "The book is probably not so compelling that you will be unable to put it down, and it probably won’t be one that you reread every year. [...] The doggy protagonist seemed rather flat, and was much less interesting than the things he saw and the things he did." Offer summed up the book as "charming".[9]