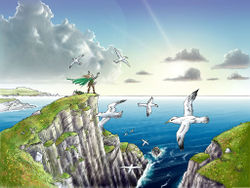 "To the Sea, to the Sea! The white gulls are crying,
The wind is blowing, and the white foam is flying."
― From the poem sung by Legolas in The Return of the King, "The Field of Cormallen"

Gulls or mews were birds found on all shores in Arda.

Gulls were common in all sea-bordering lands (perhaps especially abundant on the cape of Bar-in-Mŷl, the "Home of the Gulls", in the land of the Falas[1]), and for that, they were often attributed to Ossë.[2] The Teleri that dwelt in the Havens were very fond of them, and their mewing welcomed Tuor to their land.[3] They were also known in Númenor[4] and Gondor.[5]

Their association with the sea caused a great sense of longing for the journey to Valinor among Elves that were not familiar with their sound. One of those was Legolas.[5]

In the Etymologies, one Noldorin and one Quenya word for "gull" appear, both from the same root: maew and maiwë.[6] A later recorded Sindarin word is mŷl,[1] which replaced gwael.[1]

In manuscripts related to the Etymologies Tolkien also experimented with the Noldorin form cuen, glossed as "small gull, petrel".[7]

In the earliest version of the legendarium in The Book of Lost Tales, the house of the Wing wore swan or gull-like feathers on their helmets.[2]

In the 1937 Quenta Silmarillion, the Lindar were at one point considered the "Lords of the Gulls" among many other names.[8]

In the story Roverandom, a seagull named Mew brings the dog Rover to the moon. On their way, Mew stops to visit other sea-birds, among them the "oldest and most important of all the Blackbacked Gulls".[9]