Ossë was a Maia of the Inner Seas associated with Ulmo.

Ossë is a vassal of Ulmo, but he loves the winds and prefers the coasts and isles of Middle-earth[1] over the deeps of his master. There is some darkness and violence in his spirit, presumably after his seduction by Melkor, and still enjoys raging in storms despite the will of Ulmo; only his spouse, Uinen can restrain his wild urges. He obeys the will of Mandos.[2] He is friend to mariners, but they don't trust his unpredictable temperament.[3]

In the early days of Arda, Ossë turned to Melkor for a time, but Uinen brought him back to the loyalty of Ulmo. However, Ossë's wild and wilful nature was still evident despite remaining loyal to Ulmo.[3]

During the Great March of the Eldar to Valinor, Ossë was sent to befriend the Lindar, the clan of the Eldar who lingered by the shores of Belegaer on their way, and he taught them sea-lore and sea-music. When Ulmo returned with the floating island for them to resume their trip to the west, Ossë (who loved the shores of Middle-earth) did not wish to part with his friends; he persuaded some, like Círdan, to remain there, at the Falas and the Bay of Balar. These afterwards became the Falathrim.[1] 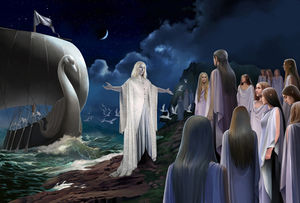 As Ulmo ferried the floating island with Olwë and his Lindar to Eldamar, they heard Ossë's song and begged Ulmo to stop off the shore, which he did. Ossë fastened the island to the bottom, and it became Tol Eressëa, the lonely isle off the Bay of Eldamar. However soon the Falmari of the island longed for the splendour and Light of Valinor and wished to see their kindred there. Grieving, Ossë submitted to the will of the Valar and Ulmo, and taught them ship-building and offered them swans to draw them to Valinor.[1]

With his master, Ossë often visited Nevrast and the feet of Mount Taras in Middle-earth, and many Sindar were concentrated to that place.[4]

After the First Kinslaying, Olwë called upon Ossë against the Noldor, but he came not, as the Valar did not wish to hinder the Flight of the Noldor with violence.[5]

After the Valar pronounced the Doom of the Noldor, Ossë helped guard the shores of Beleriand to keep the ships of the Noldor from reaching Valinor. His storms had a part in wrecking all the ships that they sent, and only one Elf from among their crews survived, by the will of Ulmo: Voronwë.[6]

In the Second Age he raised the island of Elenna (Númenor) from the depths of the Sea.[7]

At least two explanations exist for the name Ossë. In The Etymologies, it is understood as the Qenya word osse ("terror"), deriving from the root GOS ("dread").[8]

A later note pertaining to the name instead suggests it is a name of non-Elvish origin, deriving from Valarin Oš(o)šai ("spuming, foaming").[9] The same later note mentions that Ossë's Sindarin names were Gaerys (also containing the S. element gaer "dread")[10] and Yssion.[9]

In older versions of The Silmarillion as well as the Annals of Aman, Ossë and his spouse Uinen were Valar in their own right, and often opposed the will of Ulmo.

In that conception, Ossë is the source of the name Balar in place-names such as Cape Balar, Isle of Balar and Bay of Balar, which he often visited, and from which all Beleriand was named.[12][13]

Ossë had a large house in Valmar made by Ónen and Oarni from pearls with a flour from sea water and roof from foam. He lived there during congregations of Valar or when the noise of the sea tired him.[14]

His name Falman from the root FALA (e.g. falma "foam") appears in The Book of Lost Tales Part One.[16]