Exile of the Noldor 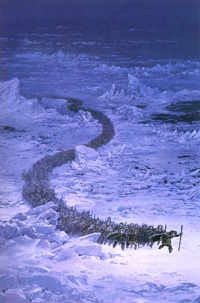 Ted Nasmith - Fingolfin Leads the Host Across the Helcaraxë

After the Darkening of Valinor, Fëanor rebelled against the Valar, and set out from Aman with most of his fellow Noldor. His aim was to make war on Melkor for the recovery of the stolen Silmarils, and his hatred and pride were so great that he swore an Oath that bound himself and his sons to destroy any who held them from their goal.

From this Oath stemmed the Kinslaying at Alqualondë, and aboard the stolen ships of the Teleri Fëanor and his sons set out to gain their vengeance in Middle-earth. Left behind by Fëanor, Fingolfin and his people had to make their way into Middle-earth across the treacherous wastes of the Helcaraxë. The Valar allowed them to depart, but closed their land against any return, making them exiles from Aman. After long ages, the exile was relaxed, and the Noldor were allowed to return to the Blessed Realm. Among the last of these was Galadriel, who had been part of the ancient rebellion, but was forgiven at last because of her actions in the War of the Ring.

The Noldor who left Aman called themselves the Etyañgoldi ("Exiled Ñoldor") in Quenya, or simply the "Noldor" because few of their clan chose to remain in Aman. Although the exiled Noldor claimed that they were Amanyar ("Those of Aman"), in practice the term Amanyar came to refer to only those Elves who remained in Aman.[2] But unlike all other Elves of Middle-earth (except Thingol), the Exiles were counted among the Kalaquendi ("Light-elves") because they had experienced the light of the Two Trees of Valinor.[3]