"On the House of Fëanor the wrath of the Valar lieth from the West unto the uttermost East, and upon all that will follow them it shall be laid also."
― Doom of Mandos

The House of Fëanor were the cursed descendants and followers of Fëanor, the eldest son of Finwë and his spouse Míriel. 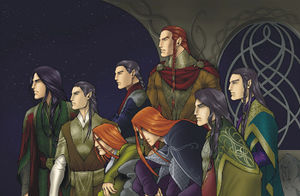 Fëanor was one of the greatest, and certainly the most skilled, of the Noldor, but his burning anger at the loss of his Silmarils led him to commit acts that would greatly diminish the influence of his house among his people. As the heir of Finwë, his descendants (specifically Maedhros, his eldest son) should have inherited the Kingship of the Noldor, but because of Fëanor's rash acts, the lordship of the Noldor passed to his brothers: Finarfin in Aman, and Fingolfin in Middle-earth. For this reason, the members of the House of Fëanor are referred to as the Dispossessed.

The history of the House was a woeful one, and most of its members met an early end. Fëanor and six of his seven sons perished before the end of the First Age. His second son Maglor survived beyond the War of Wrath, wandering the shores of Middle-earth, but his fate is unknown. The last of the House was Fëanor's grandson Celebrimbor, the son of Curufin, who had a great part in the making of the Rings of Power, and was tortured to death by Sauron during the Second Age.

In the Etymologies, the Noldorin name of the House of Fëanor was Nos Fëanor (cf. nosse).[1]

The name "Fëanorians" is many times used by the fandom for the followers of Fëanor, but Tolkien never applied the term to them. However, Christopher Tolkien used it many times in his notes and comments along The History of Middle-earth, probably just for practical reasons.[2]