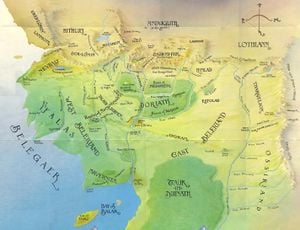 East Beleriand marked in Beleriand and the North by John Howe

East Beleriand was the part of Beleriand that lay east of the River Sirion and west of the Gelion, and stretched a hundred leagues across at its widest[1]. This region was ruled by Thingol from Doriath and (east of Aros) largely under the control of the Sons of Fëanor during the First Age.[2]

Sirion descended from the north to the south. With its tributaries Mindeb, Esgalduin, Aros and its tributary Celon, they formed Neldoreth and Region, the forests of Doriath. North of Doriath, the rivers separated the lands of Dimbar, Nan Dungortheb, Dor Dínen and Himlad, just south from the northern highlands.

Separated from Doriath, next to the eastern banks of Celon was the small wood of Nan Elmoth.

The Pass of Aglon and the March of Maedhros were two passes among a couple of small mountain ranges, which led to Lothlann.

To the south was Estolad and more open, vast empty lands, until the eastern part of the ridge of Andram, ending to the Amon Ereb.

The eastern part of Beleriand was dominated by the river Gelion, which separated the main lands from Thargelion and the land of Ossiriand, marked by the river's tributaries (Ascar, Thalos, Legolin, Brilthor, Duilwen and Adurant). Further to the east, the Blue Mountains separated Beleriand from Eriador.

Between the great rivers Sirion and Gelion, to the south of Beleriand was the great forest Taur-im-Duinath.[3]