The hill was the highest point in that region and the easternmost hill of Andram, but was standing alone. Within sight of the Gelion, it had tremendous strategic importance, because it guarded the eastern passage around the Long Wall of the Andram into the southern parts of East Beleriand and the northern Taur-im-Duinath.[2]

It was here that Denethor of the Nandor met his end in the First Battle.[3] Much later, Caranthir fortified it to guard his escape into the south after the Dagor Bragollach[4] and the Fëanorions withdrew there after Nirnaeth Arnoediad.[5] 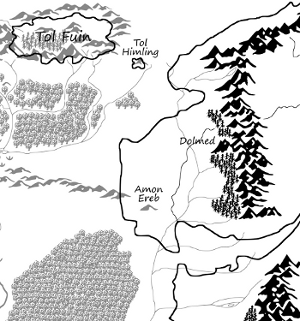 Collage of maps showing where Amon Ereb would be (if surviving the submersion of Beleriand).

A small circle appears in Forlindon on Tolkien's early draft map for The Lord of the Rings.[6]:302 Christopher Tolkien cannot explain this feature[6]:301 and notes that in his own 1943 redrawn map, the circular area is no longer present.[6]:322 It is possible to create a collage of the Beleriand and the Eriador maps to show the small circular area on the Third Age map coinciding with the location of Amon Ereb.[7] Noad suggests that Amon Ereb may have been once thought to have survived the submersion of Beleriand, although there is no textual evidence for it, and other Tolkienists such as Karen Fonstad have reconciled the two maps in a different way [8].

In MERP, Amon Ereb does indeed survive the destruction of Beleriand.