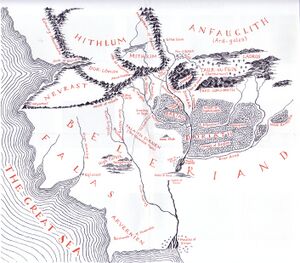 Map of Beleriand by Christopher Tolkien

West Beleriand covered the lands of Beleriand to the west of the River Sirion; they were for the most part under the lordship of Finrod Felagund in Nargothrond, and Círdan the Shipwright in the Falas.[1]

West Beleriand was the region of Beleriand facing Belegaer to the west with the coast of Falas and the havens of Brithombar and Eglarest and the seaward tower of Barad Nimras. To the north the Ered Wethrin separated Hithlum and Nevrast from the rest of Beleriand. The forested strip of Nivrim was in West Beleriand, separated from the rest of Doriath by Sirion. To the south, Nan Tathren was the small forested area between Narog and Sirion. Further south, the land of Arvernien with the forest of Nimbrethil formed the Bay of Balar, ending to the Cape Balar.

Rivers included Brithon and Nenning and the tributaries to Sirion, Narog (with Ginglith and Ringwil) and Taeglin (with Malduin and other minor rivers). Between Ginglith and Narog was the field of Tumhalad. The Ravines of Taeglin surrounded the Forest of Brethil.

Between Narog and Sirion lay Talath Dirnen, a part of the Realm of Nargothrond with the hill of Amon Rûdh. To that realm also belonged Taur-en-Faroth to the west of Narog.[2]

At its widest this region was ninety-nine leagues across.[3]