(Redirected from Forest of Brethil) 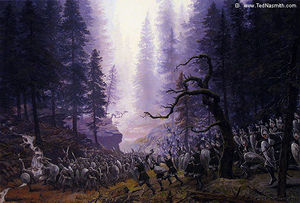 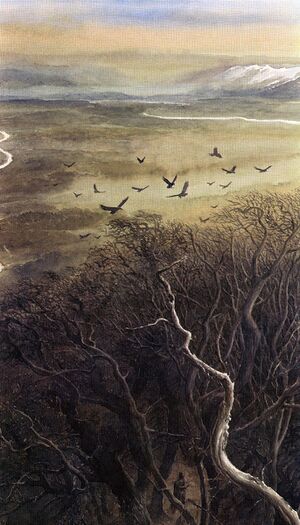 After the death of the dragon Glaurung, Túrin wrenched Gurthang from the belly of the beast. This action caused a spurt of black venomous blood to drench Túrin's hand. The pain of his burned hand and a baleful glare by the dragon caused Túrin to swoon and appear as if dead. Soon after Nienor, still under the dragon's curse and unaware of her true name, came to the scene and bound her husband Túrin's hand. She cried for him to awake but this only aroused Glaurung one last time. He hailed her by her true name and as he died she recalled all of her past. Niënor was horrified when she learned that the child whom she carried within her womb was her brother's child. Brandir witnessed the scene and cried out to Niënor, but she fled and jumped to her death at Cabed-en-Aras. When Brandir walked back to Nen Girith, where the people of Brethil cowered, he spoke of the deaths of the children of Húrin and called the land Sarch nia Chîn Húrin, "Grave of the Children of Húrin", stating that it would never be free of grief.[5]

Húrin travelled to Brethil after his journey to Hithlum. He visited the grave of Túrin and Nienor and by the stone he found his wife Morwen who died shortly after.[7] Húrin was taken to Obel Halad where he caused infighting amongst the Men of Brethil.[8]