"Turambar swept Gurthang from its sheath and stabbed with it up above his head, and it seemed to those that looked on that a flame leapt from Turambar's hand many feet into the air. Then they gave a great cry: 'The Black Thorn of Brethil!'"
― The Children of Húrin, "The Coming of Glaurung"

Gurthang was the sword of Túrin Turambar, reforged from Anglachel the sword wielded by Beleg Cúthalion when Túrin slew him in a tragic turn of events.

It was black and shone with a pale fire. With it Túrin performed great deeds but also senseless acts, but it broke when Túrin killed himself upon the sword.

Túrin was led to Nargothrond by Gwindor who had aided Beleg in the rescue. Once in Nargothrond Túrin had Anglachel forged anew. He renamed the blade Gurthang, "Iron of Death". The sword was wielded by Túrin throughout his time at Nargothrond as he became a captain and led the Elves of Nargothrond into open warfare, a tactic they were not well versed in. His increasing fame with Gurthang gave Túrin a new name: Mormegil "The Black Sword" of Nargothrond.[3] Túrin's exploits with the Elves of Nargothrond culminated with the Battle of Tumhalad which led to the ruin of Nargothrond. There Túrin faced Glaurung and rose his sword against the dragon, but then he stood still by an enchantment from the dragon's look. Briefly freed, Túrin tried to give stroke against Glaurung's eyes, but the dragon imposed upon him a new enchantment that led him towards Dor-lómin.[4] While running in despair with his black sword drawn, he was spotted by Tuor and Voronwë.[5]

Soon later, Gurthang was used by Túrin to slay the Easterling chief Brodda[6] and it remained with him when he came to Brethil. There he was recognized by Dorlas as the Black Sword, but wishing to be rid of his past, Túrin put Gurthang away, using bows and spears instead.[7] Only when orcs started to threaten Brethil in numbers did Túrin once again take up Gurthang to repulse them. When Glaurung came to Brethil pursuing Túrin, a desperate council was held in Ephel Brandir as to how to deal with the threat. Túrin told the Haladin of the tale of Azaghâl Lord of Belegost and how his knife forced Glaurung to flee, Túrin then declared "But here is a thorn sharper and longer than the knife of Azaghâl", and showed them Gurthang. Then the Haladin cried out "The Black Thorn of Brethil!"[8]

Túrin succeeded in slaying Glaurung with Gurthang at Cabed-en-Aras but fell into a swoon when he wrested it from Glaurung's belly.[9] He was then told by Brandir that his wife was in fact his sister Nienor as recounted by Glaurung, and in a rage, Túrin slew Brandir. Discovering from Mablung that this was in fact true, Túrin returned to Cabed-en-Aras to commit suicide, addressing Gurthang with courteous words:

'Hail Gurthang! No lord or loyalty dost thou know, save the hand that wieldeth thee. From no blood wilt thou shrink. Wilt thou therefore take Túrin Turambar, wilt thou slay me swiftly?' And from the blade rang a cold voice in answer: 'Yea, I will drink thy blood gladly, that so I may forget the blood of Beleg my master, and the blood of Brandir slain unjustly. I will slay thee swiftly.'[note 1]

Túrin cast himself upon Gurthang and the blade broke asunder. It was buried with Túrin beneath the Stone of the Hapless.[10]

According to a prophecy, Túrin will use his black sword in the Final Battle to kill Morgoth definitely.[11][note 2] 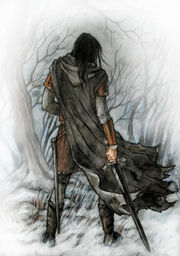 In the earliest version of the legendarium in The Book of Lost Tales, the black sword appears for first time when Túrin is already among the Rodothlim. He had not used any sword after killing Beleg, simply using a club, so he asked for a sword to Orodreth. A new one was made for him, "and it was made by magic to be utterly black save at its edges, and those were shining bright and sharp as but Gnome-steel may be." It was heavy and had a black sheath. Túrin named it Gurtholfin ("Wand of Death"). It is said that sometimes the sword jumped to Túrin's hands by itself and whispered him dark words. Now Túrin began cleansing the lands of the Rodothlim from any enemy, and became known as the Blacksword, Mormagli or Mormakil among the Gnomes.[14]:83-84

The sword had become Turambar's most precious possession, for all things died when touched by it, so he tried to recover it from the dragon's body and passed out because of the poison.[14]:108 Later, when Turambar knew the bitter truth, he asked death to the sword, claiming it was the only thing left to him, and Gurtholfin answered it would take any blood gladly. Thus Turambar cast himself upon the sword's point and died. In this version, there is no mention of the sword being broken.[14]:112

Gurtholfin will also appear in the end of the world, as it is said that "Turambar indeed shall stand beside Fionwë in the Great Wrack, and Melko and his drakes shall curse the sword of Mormakil".[14]:116

The name Gurtholfin ("Wand of Death") is in Gnomish, from gurth(u) ("death") + olf(in) ("branch, wand, stick").[15] The first form of the name was Gortholfin, but it was changed during the writing of the narrative.[16] Its Qenya cognate was Urdolwen.[17]

The scene of Túrin's suicide is directly inspired by the death of Kullervo in the Kalevala, although Tolkien gave more importance to the sword in his story.[18] After knowing he had commited incest, Kullervo asks his sword to take his guilty flesh:

The sword [...]
answered with this word: "Why
should I not eat what I like
not eat guilty flesh
not drink blood that is to blame?
I'll eat even guiltless flesh
I'll drink blameless blood".[19]

In the first version of the story in The Book of Lost Tales (see above), the words are even closer to the source of inspiration, as the black sword answers that it will drink any blood without distinction.[14]:112