The Easterlings were Men who lived in the East of Middle-earth, and mostly served the Dark Powers, being thus bitter foes of the Free peoples.

In the First Age, Men awoke in Hildórien in the East. Early on, some of them were corrupted by Morgoth, prompting others (the Edain) to migrate westwards.[1]

During the Dark Years Sauron dominated most of the Westlands, also urging men from the East to go to the west for loot. Those troubled the Northmen who waged a war against them and the orcs. When Sauron was driven back to Mordor, he continued his expansions eastwards gaining servants and worshippers.[1][4] 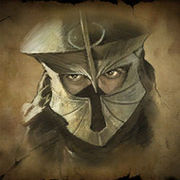 During that time emissaries of Sauron instigated tribes of Easterlings to form the confederacy known as the Wainriders (q.v.) who would trouble the Kingdom and the Northmen.[9]

Easterlings from regions beyond the Sea of Rhûn[15] serving Mordor fought in the War of the Ring alongside the Haradrim and Variags. They appeared in the Battle of the Pelennor Fields.

Around the same time Sauron's northern host pushed King Brand back and crossed the Carnen invading the Kingdom of Dale; Easterlings were temporarily victorious at the Battle of Dale.[16]

In the Fourth Age some Easterlings were subdued by King Elessar and King Éomer.[17]

Some like the Wainriders and the Balchoth had large chariots, wagons and wains which they used to run their foes down, as well as live in and used to fortify their camps.[13] During the Battle of the Pelennor Fields, Easterlings were bearded and used axes.[18]

The Men collectively referred to as Easterlings by the Free Peoples of the West are portayed as several clans distinct in appearance that are only united by the might of Sauron. The Khundolar Easterlings attack the Wold of Rohan from the Brown Lands and also fight on Sauron's side at the Battle of the Morannon. The Jangovar Easterlings attack Dale and the Lonely Mountain in the north, and after Sauron's defeat the remainder of that army continues to linger in those lands. The Sûhalar Easterlings are shorter in stature and armed with axes, to the point where some mistake them for dwarves, their armies participate in the Siege of Minas Tirith.