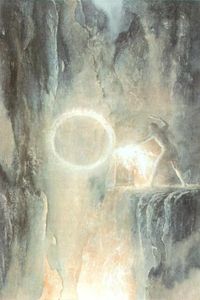 The Rings of Power were Rings created by the Elves of Eregion, nineteen Great Rings (and many other lesser rings) with knowledge obtained from Sauron, and several of them with Sauron aiding the creation. Sauron forged the twentieth Great Ring, called The One Ring or the Ruling Ring, secretly in the fires of Mount Doom.

The Three Rings, the Seven Rings and the Nine Rings were all set with their proper gem, but the One Ring was round and unadorned like the lesser rings of Power.[1]

Three Rings for the Elven-kings under the sky,


Seven for the Dwarf-lords in their halls of stone,
Nine for Mortal Men doomed to die,
One for the Dark Lord on his dark throne
In the Land of Mordor where the Shadows lie
One ring to rule them all, one ring to find them,
One ring to bring them all and in the darkness bind them


In the Land of Mordor where the Shadows lie.
—Ring Verse 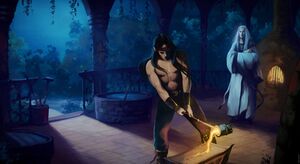 The Forging by Ralph Damiani

Around S.A. 1200, Sauron started to corrupt the Elves.[2] He did not manage to approach Gil-galad and Elrond but he had better luck with the Elven-smiths of Eregion. The Gwaith-i-Mírdain of Eregion were mostly Noldor, and wished to have the same joys in Middle-earth as the Elves who had returned to Valinor. Sauron therefore presented himself as "Annatar", an emissary from the Valar,[3] and tempted the Elves by offering the knowledge to transform Middle-earth.

Annatar taught the smiths the knowledge of how to create Rings, which would grant the Elves who wear them certain powers. At first the Elves created some lesser rings, which were only essays in the craft before it was full-grown. In approximately S.A. 1500, the Greater 16 were created.[2] When Annatar departed from Eregion, Celebrimbor went on to forge the Three Rings using the knowledge he had gained from him, but without his involvement, and finished them around S.A. 1590.

Sauron then created The One Ring around 1600, alone, in the heart of Mount Doom. Its purpose was to rule over all the other rings, and Sauron put a great part of his power into it. The Elves, upon the creation of the One Ring, heard Sauron speak the spell, and realized they had been betrayed.[4]

As soon as Sauron put on the One, the bearers of the Three became aware of him and took them off in fear and anger. They defied Sauron and refused to use the Rings. Seeing this, Sauron attempted to claim the Rings to distribute them to other peoples; he waged War against the Elves, and although the Elves fought valiantly, Eregion was destroyed. Celebrimbor however managed to salvage the Three he created himself and secretly gave them to Gil-galad, Círdan, and Galadriel. They were originally given to the three greatest Eldar in Middle-earth at that time.[3][2] During the Sack of Eregion, Sauron took the Nine Rings and other lesser works from them; but he could not find the rest. Then Celebrimbor was put to torment, and he revealed the existence of the Seven Rings.[5]

Sauron then distributed them to Lords who desired secret power beyond their nature, hoping to bring them under his sway; Men who were the readiest to his will, became powerful sorcerers and Kings; and Dwarves who grew greedier and augmented their treasures. As Sauron had to do with their making, he easily perverted and accursed the Rings, betraying those who wore them.[3]

The Mannish lords who held the Nine were consumed by them and entered the wraith-world, becoming the Ringwraiths, servants of Sauron without will. The Dwarves who held the Seven were largely (but not totally) unaffected, but the wrath and greed brought upon them brought evils that benefitted Sauron. The Three were always held by the Elves, and Gandalf upon his arrival.[3]

Nothing is known of the fate of the lesser rings, made as essays to the craft, but, according to Gandalf, still dangerous for mortals that might have found them.[6]

The Rings of Power all had certain common properties. The Elves of Eregion created the rings to preserve their lands, attempting to make them as beautiful as Valinor. Thus, a primary power of the rings was to prevent and decelerate decay and change. The rings also increased a bearer's own natural powers, seemingly granting 'magic' abilities.[7] 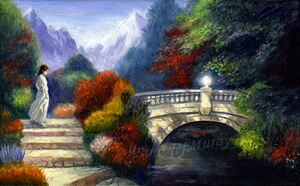 In her father's garden by Jef Murray

According to Gandalf, a Ring of Power has the ability to "look after itself". A bearer of a Ring was unable to abandon it, but a ring could "decide" to abandon its wearer as the One Ring did many times in order to get back to Sauron.[8] The One Ring specifically had such power of lust that nobody had the will to try to injure it[7] (even though it was indestructible itself).

Additionally, the One Ring, along with the Seven and the Nine, had the ability to tap into the Unseen at different degrees. The One could completely shift the wearer to the Spirit World, rendering the material body invisible to mortals.[7] The Nine and the Seven were so strongly under Sauron's control that they could cause the wearer, especially Men, to fade and turn into a wraith under Sauron's domination.[8]

The Dwarves however were more resistant to most of these effects. They mostly suffered under an increased lust for gold, which provided occasion for quarrels among themselves. They used their Seven Rings to increase their treasure troves; the treasure hoards of these dwarves drew the mightiest of dragons and opponents.[3]

The Three did not make their wearers invisible[7] (though a wearer could make the ring itself invisible[9]). A wearer of one of the Rings of Three gained the power to heal and preserve, in many different ways, whatever they controlled. Galadriel's and Elrond's Rings allowed them to fend off Sauron and protect and preserve Lothlórien and Rivendell. Narya also had the power to inspire hope and courage in others.[10]

For The One to have the ability to control The Three, it was necessary for Sauron to allow a significant amount of his power and will to flow into it during its forging. As it was the Master Ring, whoever mastered the One also had control over the other rings, the works done through them, and also could perceive and control the thoughts of anyone wearing another ring. But Sauron never managed to do so, because as soon as he wore it upon his finger, the Elves became aware of him.[3]

In one draft not the Elves of Eregion, but the dark master made many rings and distributed them to ensnare others. The Elves did not have three, but had many rings. There is no mentioning of the Elves discovering the intent of The Lord of the Rings and taking off their rings. Instead it is mentioned that there were now many Elf-wraiths. The Goblins had some rings and their wraiths are very evil and totally under the command of the dark master. The elements that the Dwarves has seven rings and that they only turned them greedy and that a golden ring was the foundation of each of the seven hoards of the Dwarves were already present. However, it is not mentioned that the dwarves were hard to dominate, that their thoughts could not be read or that they could not be turned into wraiths, it is only said that their rings could not make them invisible. Instead of nine rings, Men had received three rings, but had found other rings in secret places that had been thrown away by Elf-wraiths. The men-wraiths were servants of the dark master and brought their rings back to him. Instead of Isildur the ring that was later found by Bilbo fell of the hand of an Elf, but the other elements that he fled from his pursuers in a war and that the ring betrayed him and fell from his hand when he swam across a river so that he became visible to Goblins that killed him are already present in this draft. Instead of a Hobbit called Déagol, a Hobbit called Dígol found the ring and used its effect to turn him invisible for malicious purposes, turned to muttering to himself so that he was called Gollum and was told to go into exile by his relatives.[12] In an earlier draft it is mentioned that your turn permanently invsible that everything becomes very faint for you that you can smell more clearly than you can hear or say and that you turn into a ringwraith under the command of the Lord of the Rings. It is also mentioned that you do not have the power to turn things invisible and that your clothes are visible.[13]

The Rings were the background story as fleshed out by Tolkien, out of the Ring that appeared in The Hobbit. The lore of the Rings (especially the One) are often compared to the "Ring of the Nibelungs" although Tolkien denounced any direct inspiration.[14]