"These were the dark years for Men of Middle-earth, but the years of the glory of Númenor. Of events in Middle-earth the records are few and brief, and their dates are often uncertain."
― Appendix B: The Tale of Years, "The Second Age"

Beginning in about the 584th year since the Return of the Noldor to Middle-earth, the Second Age is the longest of the chronicled Ages. It began after the destruction of Beleriand in the War of Wrath. The founding of Lindon and the creation of Númenor, the two major Elvish and Mannish kingdoms of the Age, took place soon afterwards. 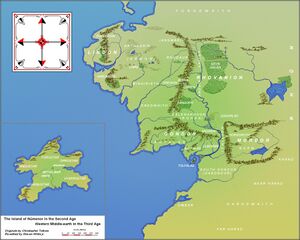 Lindon was an Elvish realm ruled by Gil-galad, last High King of the Noldor in Middle-earth. It lay in what remained of Beleriand, between the mountains of Ered Luin and the Great Sea. From its Grey Havens Elven ships sailed daily to the West. Imladris, or Rivendell, was founded by Elrond about halfway through the Age.

In the early part of the Second Age many Noldorin Elves journeyed East of the Ered Luin and established the realm of Eregion near the Misty Mountains. These Elves, led by Celebrimbor son of Curufin, became close friends with the Dwarves of Khazad-dûm. Together they made great endeavours in smithcraft, until the skill of the Elves reached a height never to be matched again. This attracted the attention of Sauron, who tricked the Elves into making the Rings of Power by his aid. When the Elves perceived that he desired to rule them with the One Ring, they resisted, and Sauron waged war against them. In this war, Eregion was destroyed and Celebrimbor killed.

The Second Age was the age of the glory of Númenor, the great island kingdom that was created for the descendants of the Edain in the first years of the Age, and as the years passed, their power grew until it surpassed that of any nation of Men, before or since. They sailed east, exploring Middle-earth and founding great cities there. Eventually, their power and pride became so great that they challenged the Valar themselves, and were destroyed.

Meanwhile, in Middle-earth there were Dark Years, in which Men lived in simple tribal societies or were under the domination of Sauron. The men who served Sauron revered him as a god and feared him greatly. In the beginning of the Second Age, the Dúnedain attempted to help the Men of Middle-earth, but eventually desired to dominate them.

The Downfall of Númenor was not the end of the Second Age; a remnant of the Númenóreans led by Elendil escaped its wreck and founded kingdoms in Middle-earth: Arnor in the north and Gondor in the south. Along with Gil-galad, they formed a mighty alliance, the Last Alliance of Elves and Men, and marched on Sauron, who had grown great again, assailing the Dark Tower of Barad-dûr. With the first overthrow of Sauron by the Alliance, the Second Age came to its end.