Celeborn was one of the noblest of the Sindar[4][5] — who wedded the Lady Galadriel of the House of Finarfin and with her, he remained in Middle-earth after the end of the First Age. 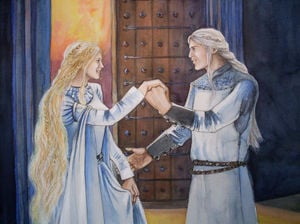 Celeborn was a Sindarin prince of Doriath,[6] being the grandson of Elmo[7], the brother of Thingol; thus, he was the grand-nephew of the King of Doriath.[8]

For the rest of the First Age, Celeborn and Galadriel are not mentioned to have played any significant role in the general course of events of the Age, while their relatives, both Sindar and Noldor, did. By the Fall of Nargothrond in F.A. 495, Galadriel passed over the Blue Mountains so it seems likely that Celeborn followed her although this is not known for certain.[9]

After the fall of Beleriand, Celeborn and Galadriel lived in Lindon for some time. Celeborn ruled the fief of Harlindon, which was composed mostly of Sindar, under High King Gil-galad.[10]

Galadriel and Celeborn crossed into Eriador with many Noldor, Sindar, and Green-elves in their following. For a while, they dwelt in the country about Lake Nenuial, ruling the Eldar in Eriador, including the wandering companies of the native Nandor. Probably around S.A. 300, a daughter was born to Galadriel and Celeborn, named Celebrían.[5] They departed for Eregion and arrived there by S.A. 750.[8][11] It was ruled by Celebrimbor, grandson of Fëanor and the distant half-cousin of Galadriel.

It was only sometime between S.A. 1350 and 1400[8] that Galadriel crossed the Hithaeglir through Khazad-dûm and relocated there with their daughter Celebrían, becoming great among the Wood-elves.[8] Celeborn decided to stay in Eregion due to his enmity towards the Dwarves.[8] It is said that Celeborn fought in the Sack of Eregion leading the remnants of Eregion out of the battle. He and Elrond narrowly escaped to a dell, where the latter founded Rivendell.[8]

After the War of the Elves and Sauron, Galadriel passed again through Moria with Celebrían and came to Imladris, seeking Celeborn.[8] There she found him, and there they dwelt together for a long time.[8] Some time later, Galadriel and Celeborn departed from Imladris and went to the little-inhabited lands between the mouth of the Gwathló and Ethir Anduin.[8] There they dwelt in Belfalas, at the place that was afterwards called Dol Amroth; and their company was swelled by Silvan Elves from Lórinand.[8] 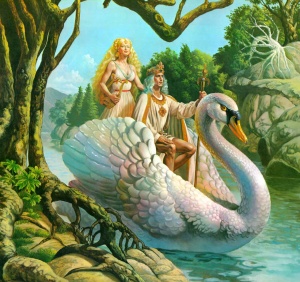 After long journeys in Rhovanion, from Gondor and the borders of Mordor to Thranduil in the north, Celeborn and Galadriel passed over the mountains to Imladris, and there dwelt for many years.[12] It was there, in T.A. 109[13], that his daughter Celebrían wedded Elrond Half-elven of Rivendell.

During the War of the Ring in T.A. 3019, Lothlórien received the Fellowship of the Ring, composed of various travellers on the quest to destroy the One Ring. Celeborn and Galadriel offered advice and boats for the Anduin, sending them on their way. After the Galadhrim repelled the forces of Dol Guldur three times, Celeborn led the forces of the Galadhrim across the Anduin and took the fortress. Galadriel threw down its walls and purified the forest.[14][15]

On 6 April,[15] that was the Elven day of New Year, Thranduil met with Celeborn in the midst of Mirkwood and renamed it Eryn Lasgalen, "The Wood of the Green Leaves". With the forest now cleansed, it was divided among the Elves and Men; Celeborn took all the forest south of the Narrows and established East Lórien.[14]

Celeborn attended the wedding of Aragorn II Elessar and his granddaughter Arwen, and on the journey to return, he bade a fond farewell to Treebeard as well. He and Galadriel escorted Gandalf and the Hobbits until the Mountains of Moria, and on 13 September they turned to return to Lothlórien.[15]

After Galadriel's departure, it is believed that Celeborn relocated to Rivendell to reside with Elladan, Elrohir, and some of the Noldor, having also grown weary of East Lórien.[1][14]

He was given the epithet "the Wise" by Galadriel.[17]

Before the summer of 1950 in an earlier version of the Appendix on Languages it was mentioned that the native language of Celeborn was Telerian, the native language of the Teleri who remained behind in the north-west of Middle-earth, of the Elves of Lórien and of the elf-kingdom in Northern Mirkwood of Thranduil, and that in the household of Galadriel also Noldorin was spoken, because she was a Noldo.[18] It thus appears that Celeborn was a wood-elf in this earlier version. In a later version of the Appendix on Languages following a major revision of 1951, it is first mentioned that Celeborn was a Sinda (Grey-elf) and that most of the people of Lórien were of a woodland race.[19] The text in the final version of the The Lord of the Rings only mentions that Celeborn was a kinsman of Thingol[20][21]. The Lord of the Rings does not mention the ancestry of Celeborn and if he was a Sinda or a Teler from Valinor. The text in the The Silmarillion also only mentions that Celeborn was a kinsman of Thingol and that Galadriel stayed in Doriath, because Celeborn lived there and did not accompany her brother Finrod to Nargothrond[6], and that Celeborn was a prince of Doriath[22] and calls him Celeborn of Doriath.[23][24] The Silmarillion leaves the ancestry of Celeborn open and there is no mention if he was a Sinda or Teler, only implying that Galadriel met Celeborn in Doriath.

In a table with the descendants of Thingol from December 1959 Thingol's younger brother Elmo has a son Galadhon who has two sons, Celeborn and Galathil, and a daughter, Nimloth, who married King Dior. However, on the same table Nimloth also appears as the daughter of Galathil. It looks as if the second thought of J.R.R. Tolkien was that Nimloth was the daughter of Galathil and the niece of Celeborn.[25] The genealogy according to this second thought was included in Unfinished Tales.[26] According to that table, Celeborn is thus the greatnephew of Thingol and second cousin of Galadriel.

In a text written in 1965[27], Celeborn is born in Beleriand and he is a descendant of Elmo.

Only a note in The Road Goes Ever On, which was published in 1967 during J.R.R. Tolkien's lifetime, strictly mentions that Celeborn was a Sinda.[4]

According to an alternate history of Celeborn and Galadriel in Unfinished Tales, Celeborn was a Teler of noble rank in Alqualondë,[28] born Teleporno,[29] grandson of Olwë, prince of Alqualondë (thus he was a kinsman of Thingol in Beleriand).[30] Only nine months before his death, J.R.R. Tolkien still was of the opinion that Celeborn was only a kinsman of Thingol afar off, because Celeborn came from Valinor and that his orginal name was Telporno.[31]

Artanis, Olwë's granddaughter and a Noldorin princess of great beauty, often spent long visits to Alqualondë and her mother’s kin. During this time the two fell in love, and Teleporno gave her the romantic epithet Alatáriel, meaning "Maiden Crowned with Radiant Garland".[32]

Later, Teleporno and Artanis helped to defend Alqualondë from the Noldor during the First Kinslaying.[30][28] Nevertheless, Artanis’s heart was fired by the stories of Fëanor of the open lands across the sea. She urged Teleporno to take a ship eastward to Endor, and he gave in. In doing so the two fell under the Ban of the Valar.

Celeborn as a Telerin prince seems a late development. This altered origin was not adopted into the published Silmarillion, primarily because it contradicted published canon, and was not incorporated in Tolkien's drafts of the earlier parts, and therefore would have necessitated a major rewrite by Christopher Tolkien and Guy Gavriel Kay to account for a separate departure of Galadriel. It is unknown whether Tolkien would have revised the story or would have felt bound by published writings.

Celeborn's Telerin ancestry would have made the couple first cousins. Morgoth's Ring states that among the Eldar first cousins might marry, but seldom did so or desired to do so.[33] Furthermore, the published Silmarillion states "Eldar wedded not with kin so near," in reference to Maeglin's attraction to his first cousin Idril.[34]

Celeborn is played by Wolfgang Hinze.

Although he does not appear physically, he is mentioned by Galadriel in a conversation with Theo, telling him that they met after Celeborn saw her dancing in a glade filled with flowers. Later, when he marched off the join the war against Morgoth, Galadriel chided him that his armor did not fit properly and called him a silver clam. Though he never returned from the war, his exact fate remains unknown.