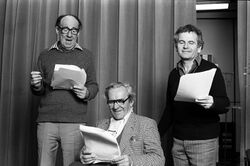 In 1981 BBC Radio 4 broadcast a dramatisation of J.R.R. Tolkien's The Lord of the Rings in 26 half-hour stereo instalments.

It followed a previous 12-part BBC Radio version from 1955 and 1956, of which no recordings are known to have survived.

Each of the original 26 episodes received two broadcasts per week - standard practice for many BBC radio serials even today. The first broadcast of Episode 2 was blacked out across a large part of south east England because of a transmitter failure (a very rare occurrence even then).

The 26-part series was subsequently edited into 13 hour-long episodes, restoring some dialogue originally cut for timing (since each hour-long episode is actually around 57 minutes, as opposed to 54 minutes for two half-hour episodes), rearranging some scenes for dramatic impact and adding linking narration and music cues. It was broadcast in 13 episodes in 1982.

The re-edited version was released on both cassette tape and CD sets which also included the soundtrack album (noticeably taken from a vinyl copy).

A soundtrack album featuring a completely re-recorded and in some cases expanded, suite of Stephen Oliver's music was released in 1981. 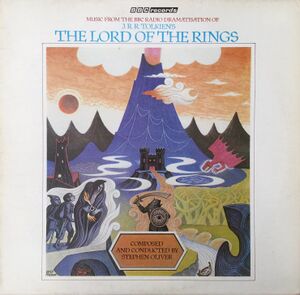 Vinyl with the soundtrack by Stephen Oliver

The script by Brian Sibley and Michael Bakewell attempts to be as faithful as possible to the original novels, but there are some errors and alterations. They include:

In 2002, to coincide with the release of Peter Jackson's The Lord of the Rings (film series), the BBC reissued the series in three sets corresponding to the three original volumes (The Fellowship of the Ring, The Two Towers and The Return of the King).

This version omitted the original episode divisions, and included a new opening and closing narration for the first two sets, and an opening narration only for the last, recorded by Ian Holm in character as Frodo Baggins - Frodo's narrations deal with his efforts to write his historical account of the War of the Ring in the Red Book, as well as his own personal reflections and musings on the story's events.

The re-edited version also included some additional music cues, which had to be taken from the soundtrack album because the original master tapes for the series music had been lost.

The soundtrack, now digitally remastered, was also included with The Return of the King set, with a demo of John Le Mesurier singing Bilbo's Last Song included as a bonus track.