The Return of the King

Tolkien conceived of The Lord of the Rings as a single work comprising six sections he called "books" and extensive appendices. The original publisher made the decision to split the work into three parts, publishing the fifth and sixth books and the appendices in the final volume. For the two final "books" Tolkien suggested the titles The War of the Ring and The End of the Third Age, which however weren't use in publication; but in the case of the third volume, he suggested The War of the Ring or The Return of the King.[2]

The chosen title refers to Aragorn's assumption of the throne. Tolkien criticised it as giving away less of the story; but he was overruled by his publishers. 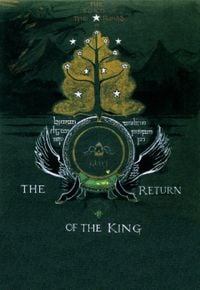 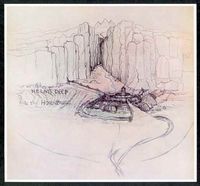 Helm's Deep and the Hornburg by J.R.R. Tolkien