Harad was the name of a great region south of Gondor and Mordor.

Historians in Gondor believed that the Drúedain came from lands south of Mordor, that they turned north into Ithilien before they reached the coasts of Harad and were the first Men to cross the Anduin, probably near Cair Andros.[1]

In the 9th century of the Second Age, the great mariner Aldarion sailed to the haven of Vinyalondë and then sailed along the coasts southwards, far beyond any place yet reached by the Númenóreans. On his return northwards he barely escaped being shipwrecked in the Harad.[4]

After the reign of Tar-Ciryatan, the Númenóreans began to set themselves up as lords in Middle-earth as they demanded tribute of goods and wealth, causing the oppression of the Haradrim. The Númenóreans expanded their control over Harad and Sauron did not at first dare to challenge them. But after the forging of the Rings of Power and the emergence of the Nazgûl, Sauron began to attack the Númenórean settlements on the coast.[2]

After the forging of the Rings of Power almost all men east and south of the Ered Luin were under Sauron's rule. Sauron was both their king and their god. These men grew strong and built many towns and walls made from stone and they were fierce in war and armed with iron.[5]

Ar-Pharazôn, the king of Númenor, landed at Umbar in 3261[6] with a great fleet and the people on the coasts fled before them. Ar-Pharazôn and his host marched through Harad to meet Sauron's forces, but they fled from the Númenóreans and Sauron allowed himself to be taken to Númenor where he corrupted the King and his followers. Under Sauron's influence, the Númenóreans became even more ruthless to the locals of Harad, enslaving them and using them for sacrifices.[2]

During the stay of Sauron in Númenor many of the Númenóreans who sailed east from Númenor and made fortresses and dwellings upon the coasts of the southlands in Middle-earth were already bent to his will.[5]

The Númenóreans who lived in Harad survived the drowning of Númenor in 3319. They were later called Black Númenóreans in Gondor[7][8], because they still served Sauron in Middle-earth after the drowning of Númenor. They fought with Sauron during the War of the Last Alliance against the Alliance of Elves and Men. Two of those númenórean lords, Herumor and Fuinur rose to power among the Haradrim.[5]

The settlements of the Númenóreans beyond Umbar had been absorbed or had become hostile to Gondor and parts of Sauron's dominions because they were made by men that were already corrupted by Sauron in Númenor.[9]

King Eärnil I of Gondor laid siege by sea and land to Umbar and in 933[10]conquered Umbar, which became a great fortress of Gondor. Three years later in 933[10] Eärnil I was lost with many ships and men in a storm near Umbar.[11]

The Men of the Harad, led by the lords that had been driven from Umbar, came with great power against Umbar and laid siege to it. King Ciryandil fell in the siege of Umbar in 1015.[12][10].

Umbar was under a siege for many years, but could not be taken because of the sea-power of Gondor. King Ciryaher of Gondor came from the north by sea and by land and crossed the river Harnen. His armies defeated the Men of the Harad and the kings of Harad were forced to acknowledge the overlordship of Gondor in 1050.[13][10]

After the Kin-strife Castamir's sons with others of their kin and with many people of the fleets sailed away from Pelargir and seized Umbar in 1448[10]. They made a refuge for all enemies of King Eldacar and a Lordship independent of Gondor at Umbar. Umbar remained at war with Gondor for many lives of men and was a thread to the coastlands of Gondor and to all traffic on the sea. After Gondor lost Umbar to the rebels, Gondor's control over the Men of the Harad was loosened.[13]

King Telumehtar of Gondor conquered Umbar in 1810. During that war the last descendants of Castamir perished and Umbar was again held for a while by the kings of Gondor.[13][10]

After the War of the Ring the newly crowned king of the Reunited Kingdom, Elessar, made peace with the Men of Harad[14] and completely subdued Umbar.[13][15]

There were fortresses and dwellings upon the coasts in the south.[5] There were also fields[15] and "dark forests" with apes in the south.[17] In Harad lived also camels and the gigantic Oliphaunts,[18][19] which were used by the Haradrim as moving war towers.

Harad was called the "Sunlands" by the Hobbits of the Shire,[19] suggesting the climate was warmer and sunnier. Even the constellations in Harad's night sky down in the southern hemisphere[20] were different from those in northern Middle-earth (Aragorn had travelled far into Harad "where the stars are strange"[21]. 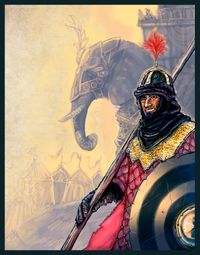 The Men of Harad were also known as the Haradrim to the peoples of north-western Middle-earth. There were many tribes of the Haradrim often mutually hostile. The men of Near Harad were brown-skinned, with black hair and dark eyes,[19] while the men of Far Harad were described as black-skinned with white eyes and red tongues like "half-trolls".[22]

Harad means "South" in Sindarin.[23] The word is derived from root KHYAR, and is cognate to Quenya hyarmen ("south").[24] It is also called Haradwaith which includes gwaith ("people").

The Men of Harad were called Haradrim ("Southern-host").[21]

An early name of Harad was (Sun)Harrowland, which is derived from the Old English name of the Aethiopans, Sigerhearwan, and therefore meaning "Aethiopia" (See also: Sigelwara Land).[25]

In early drafts of The Return of the King, the portion of Harad directly south of Mordor was named the Desert of Lostladen, Lothlann, or Lothland.[26]

Given the descriptions of the inhabitants of Middle-earth's southern lands,[19] the early etymologies of their name,[25] and the overall shape of the southern lands as shown in the Ambarkanta maps,[27] it is likely that Harad may have been based on the lands of northern and northeastern Africa and perhaps the Middle East in our world.