Of the Coming of the Elves and the Captivity of Melkor is the third chapter of the Quenta Silmarillion section within The Silmarillion. 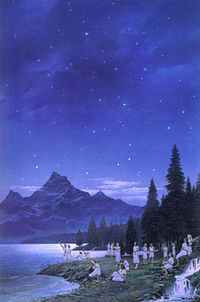 At Lake Cuiviénen by Ted Nasmith

The Valar remained in Aman under the light of the Two Trees, and only Yavanna and Oromë returned to Middle-earth at times. From there they brought tidings that those lands were under Melkor's shadow. Thus many Valar wished to make war on Melkor, especially Tulkas. But Mandos warned them in name of Manwë that they could not make war because the Firstborn were coming in that age. Then Varda prepared the world by placing new and more powerful stars in the sky to guide the Elves in the darkness of Middle-earth. Under the new lights, the Elves awoke at Cuiviénen, but this only became known to the Valar after Oromë came upon them by chance.

In Cuiviénen the Elves invented languages and lived in peace, but they were also tormented by Melkor, who sent evil creatures to plague them and instilled in their hearts fears of the Rider. It is said that he also captured many Elves in Utumno, and corrupted, them creating Orcs in mockery of the Elves. This was said to be the most evil deed of Melkor.

Returning from Middle-earth, Oromë told the Valar of the Elves, and of the shadows that troubled them. Then the Valar went to war against Melkor in the Battle of the Powers, in which the Elves heard a great shaking and were worried but did not take part in the battle. After many battles, Melkor was found cowering in the depths of Utumno, and Aulë wrought the chain Angainor to keep him in captivity. He was chained by Tulkas and imprisoned in the Halls of Mandos. However, many of Melkor's servants escaped and hid in Angband, and Sauron was among these.

The Valar sent Oromë to call the Elves to Valinor, and he choose Ingwë, Finwë and Elwë as ambassadors, because many Elves did not trust the Valar. The three ambassadors told their Kindreds about the Light of Valinor, and the Elves embarked on the journey across Middle-earth, save a few who refused, and became the dark Elves, or the Avari. Thus began the Great Journey and the Sundering of the Elves. While the Elves crossed Middle-earth, many of the Teleri, the the most numerous host, fell off along the way, creating new Elven peoples. The Elves eventually reached Beleriand by the sea. Here more Teleri stayed, for their love of the ocean, or returned to the forests (Sindar). On the shores of the Great Sea, Oromë left the Elves to seek the counsel of Manwë.