Of the Silmarils and the Unrest of the Noldor 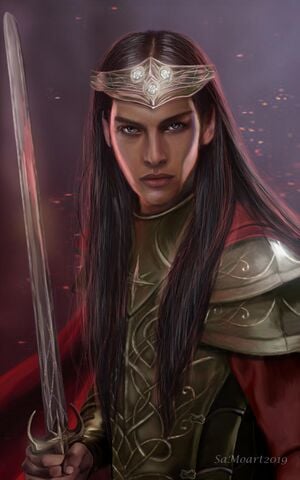 Feanor and the Silmarils by Sara M. Morello

Fëanor created the Silmarils, holy gems that contained the light of the Two Trees of Valinor. The gems were radiant in and of themselves, producing their own light, and they were blessed in such a way that evil creatures would be burned by touching them. All who saw them loved the Silmarils. Mandos fortold that they shall be pivotal in the fate of Arda.

Melkor observed them as well, and he soon desired the Silmarils for himself. He hid his true intentions and started to spread lies among the Noldor. He first created discontent among them regarding their status in Aman, suggesting that they were only second class citizens and that true power would be found back east in Middle-earth. He also said that the Valar wished for them to be in Aman so that the still-hidden race of Men might replace them in Middle-earth, for Melkor lied and said that the Valar might control Men easier than Elves.

Melkor's lies took root among the Noldor, who began to resent the Valar and be suspicious of them. His lies were especially targeted at Fëanor, in the process making him guard the Silmarils greedily and forbid anyone outside of his immediate family from seeing them. He also lied to Fingolfin and Finarfin, telling them that Fëanor will try to drive them away from Tirion.

In secret, Fëanor created a forge where he made weapons and armor for himself and his followers. Fëanor now began openly questioning the Valar and insulting them. The rest of the Noldor, including his father, Finwë, were troubled and called a council to determine what to do. Fingolfin went to Finwë and asked his father to restrain Fëanor's proud words, but Fëanor himself arrived and forced Fingolfin to leave. As he exited the chamber, Fëanor cornered him and threatened him, saying that if Fingolfin attempted to replace him in his father's love, Fëanor himself would kill Fingolfin. Fingolfin left without responding.

Manwë heard of this and called both brothers before him. There the lies of Melkor were revealed. Fëanor however was still held guilty for his actions and exiled from Tirion for twelve years until his brother released him from exile, which Fingolfin promised to do. Fëanor and his followers departed and went to their stronghold at Formenos.

Tulkas went to find Melkor and bring him to justice, but he was unable to find him. No one knew where Melkor went. Suddenly, however, Melkor appeared before Fëanor at Formenos. He tried to convince Fëanor that he was an ally, saying that he too was a Vala and thus knew the mind of the Valar. Fëanor briefly considered his words and wondered if he can trust Melkor. But at that moment, Melkor's desire overrode his reason, and he suggested that the Silmarils would be safer with him than in Aman. Fëanor saw Melkor for what he was at last and told him to go away.

Tulkas and Oromë went to find Melkor, but where ever they looked, they could not find him. The Valar grew worried and constantly sought for any news of where Melkor went. A shadow of fear and doubt fell upon all of the inhabitants of Valinor.