Of the Fifth Battle: Nirnaeth Arnoediad is the twentieth chapter of the Quenta Silmarillion section within The Silmarillion.

Beren and Lúthien returned to Middle-earth from the Halls of Mandos. After briefly greeting Thingol and Melian, they retired to the island of Tol Galen, never to be seen again by any Man. They had a son, Dior, before finally dying for the second time, witnessed by no one.

Hearing word of the deeds of Beren and Lúthien, Maedhros and the rest of the Sons of Fëanor were inspired to try and attack Morgoth. They sent emissaries out to the rest of the Eldar and their allies to gather a league, which was known as the Union of Maedhros.

Yet their prior deeds greatly hindered their effort. Orodreth of Nargothrond refused to send aid, and out of Nargothrond came only one small division led by Gwindor, whose brother Gelmir had been taken by Orcs in the previous battle. Thingol refused to aid them as well due to Celegorm and Curufin's misdeeds against his daughter Lúthien. Only Beleg and Mablung came from Doriath, and they served under Fingon, not Maedhros. Maedhros was successful in getting the help of several allies: Dwarves of Nogrod and Belegost, Easterlings led by Bór and Ulfang, Elves and Edain out of Hithlum, and members of the House of Haleth. Tidings even reached the hidden city of Gondolin of the battle that would soon occur.

Maedhros was over-eager to fight and struck too soon, cleasing of Orcs all the northern parts of Beleriand. This alerted Morgoth to his plans, and thus he began planning a counterstroke, made all the easier by the presence of Men in his employ among the forces of the Noldor.

Maedhros planned to attack Angband from the east over Anfauglith openly to attract the attention of Morgoth's forces. Meanwhile, Fingon would hide in the passes of Hithlum and wait for a signal fire in Dorthonion to reveal the right time to attack, and thus both groups would trap Morgoth's army between them. On the appointed day of Midsummer, the forces took their assigned places. Fingon brought many Men both from Dor-lómin led by Húrin and Huor, as well as the Haladin of Brethil under Haldir. Yet things had begun to go awry already, as Maedhros was delayed by false reports of an Orc attack. But the darkness that had fallen on the hearts of the army of Fingon was lifted by an unexpected arrival: Turgon, leading ten thousand spears from Gondolin, had come in secret to aid his brother. Fingon was elated and proclaimed that the darkness was finally lifting and day had come at last.

The battle soon commenced, as Morgoth had been planning for a long time. His forces crossed the deserts of Anfauglith cautiously, hiding their swords so the light would not reflect off of them. They were not noticed by the Noldor until they were almost in position. The Noldor were eager to attack, but Húrin restrained them from doing so and urged a defensive posture instead. But the Orcs came prepared, and brought with them Gelmir who had been seized in the previous battle. They cruelly put him to death and succeeded in provoking Gwindor his brother to attack.

Gwindor lead out a band to attack, and the rest of the Noldor under Fingon soon followed. They charged through the ranks of Morgoth's army and made it all of the way to the wall of Angband, but they were unable to keep up the assault, and they were soon repulsed.

Morgoth's armies counterattacked, pushing back Fingon's armies on the fourth day of the assualt. Haldir was slain along with many Men of Brethil. Turgon withheld his forces at first until Fingon was pushed back towards the Pass of Sirion, then rushed out to help Fingon. At this time as well, the forces of Maedhros finally arrived and began to turn the tide of battle. Yet even this was not enough, for Morgoth deployed every force he had: Glaurung, Orcs, Balrogs, and wolves. And the worst stroke of all, the Easterlings with Maedhros betrayed the forces of the Eldar and went over to the enemy. This final stroke proved too much, and broke the armies of the Elves. The Sons of Fëanor escaped unharmed, but many mighty warriors such as Azaghâl, lord of the Dwarves of Belegost, were struck down. 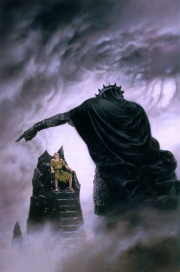 In the west, the army of Fingon was also broken. Fingon himself was struck down by Gothmog, lord of Balrogs. Only the sons of Hador, Húrin and Huor, were able to rally a defense strong enough to hold off the forces of Morgoth. They bid Turgon to retreat, with Huor saying that from Turgon and himself a new star would rise.

Huor would die soon after, while Húrin was captured and brought before Morgoth, though not before slaying more than seventy Orcs. Thus ended the battle that would later be known as Nirnaeth Arnoediad, Unnumbered Tears. It was the most grievous loss of the all the battles of Beleriand.

The kingdom of Fingon was destroyed forever as a result of the battle. The Sons of Fëanor would be reduced to a nomadic existence. The men of Brethil would only barely survive the battle. The Orcs of Morgoth had free rain to attack the North of Beleriand. The Havens of Círdan were destroyed soon after the battle, with the remnants of the Eldar fleeing southwards to the Isle of Balar. Turgon would soon reach out to Círdan in secret, and he commissioned the shipwright to build seven ships to sail westward and seek pardon from the Valar. Yet none of the ships would reach their destination, with only one sailor ever returning from the doomed voyage.

Morgoth feared Turgon's survival, and ever sought to find the hidden city of Gondolin. He had Húrin brought before him, but Húrin refused to tell him of Gondolin's location. Morgoth was enraged, and he brought Húrin to the top of a high mountain and cursed him to sit in a chair unmoving. There he cursed the family of Húrin to a malevolent fate, and he gave Húrin his own eyes to watch his family suffer their doom. Yet even this was not enough to break Húrin, no matter how many years he was cursed to remain.