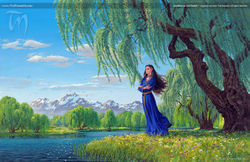 Lúthien at Tol Galen by Ted Nasmith
Tol Galen was the green isle set amidst the waters of the River Adurant in Ossiriand.[1]

After their return to Middle-earth, Beren and Lúthien dwelt in Tol Galen for the remainder of their time within the confines of Eä. It was here that their son, Dior, was born. The country surrounding Tol Galen later came to be known as Dor Firn-i-Guinar.[2]

After the death of Thingol, Beren left Tol Galen and, with his son and a host of Green-elves, came to the north of the River Ascar. At Sarn Athrad they assailed the Dwarves of Nogrod returning from Doriath with their plunders. The Dwarves were defeated and all the treasure was thown into the Ascar, save one. The Silmaril, set within the Nauglamír and taken from the crown of Morgoth himself, came back into the hands of Beren. He took it back to Tol Galen. It is told that when Lúthien wore the Necklace of the Dwarves 'the Land of the Dead that Live became like a vision of the land of the Valar, and no place has been since so fair, so fruitful, or so filled with light.'[3]