The Silmarils (Quenya Silmarilli)[1][2] were three gems of immense beauty, created by Fëanor in Aman during the Years of the Trees. Their theft by Morgoth is the trigger for the events of the First Age, narrated in the Quenta Silmarillion ("The History of the Silmarils").

The gems were crafted of the hard crystalline substance silima, which Fëanor had devised, as their shell, and were named after it. In their heart burned some of the Light of Valinor from the Two Trees. Their exact nature and the manner of making the Silmarils were known only to Fëanor, and none other succeeded in making gems of comparable greatness and beauty. Varda hallowed the Silmarils so that no mortal or evil hands were allowed to touch them without being burned and withered.[3] 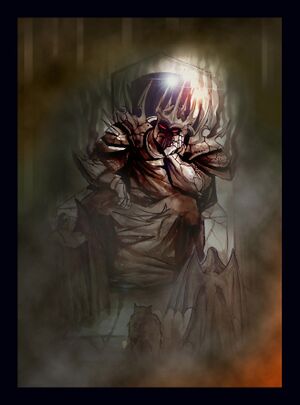 Fëanor was furious at Morgoth and at the Valar's perceived desire to take the gems for their own purposes. Then he and his Sons swore a terrible Oath: that they would not rest until the Silmarils were recovered, slaying anyone who stand in their way. Fëanor led the Noldor back to Middle-earth and a centenary war began against Morgoth in Beleriand, called the War of the Jewels. But their battles led to no end of grief for the Elves and eventually for the Men of Middle-earth.

The Sindarin King Thingol knew of the Silmarils from the Noldor. Wishing to dispose of Beren, he tasked him to fetch one for the hand of his daughter, Lúthien. Impelled by his love for her, Beren reached Angband through great peril and loss and, with the aid of Lúthien, recovered one, only for it to be swallowed by Carcharoth. The hallowed light tormented evil Carcharoth, until he was slain in the Hunting of the Wolf. The Silmaril thus was delivered to Thingol, fulfilling his Quest.[5] 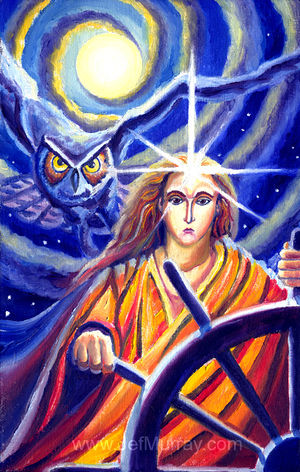 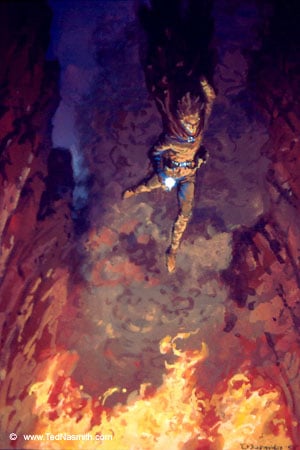 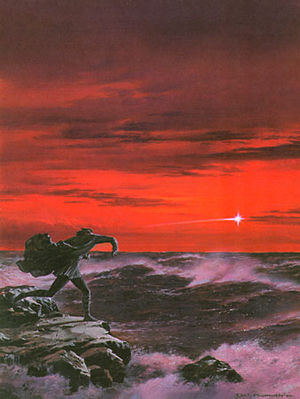 Years passed and the Silmaril passed to the hands of Elwing's husband, Eärendil, the lord of the Havens of Sirion. His people considered the Silmaril to be a blessing for their houses and ships. But the sons of Fëanor still pursued the Silmaril and when they learned that Elwing escaped there, they made their demand in friendly terms, while Eärendil was absent in one of his voyages. But the people of Sirion refused to surrender it, considering it a rightful prize of Beren and Lúthien. Therefore the Fëanorians resolved to make another assault, but again, Elwing and the Silmaril escaped. With the help of Ulmo, Elwing and the Silmaril ended up in the hands of Eärendil; it was its light that guided him through the Shadowy Seas and he found his way to Valinor. The Valar then set this Silmaril as a star in the sky, bound on Eärendil's brow as he sailed through the sky.[7]

It is said that Fëanor will return for Dagor Dagorath. Following Melkor's final return and ultimate defeat, the World will be changed and the Silmarils recovered. Fëanor will break his jewels and with their fire Yavanna will revive the Two Trees. The Pelóri Mountains will be flattened and the light of the Two Trees will fill Arda again in a new age of Eternal Bliss.[8]

The word is said to contain silima, the substance they were made from, as well as an element from brightness, ril.[1]

They mean "radiance of pure light".[9] It might contain the ending rillë ("brilliance").[10]

Another early Quenya name for a Silmaril was Ilumírë.[11]

In The Etymologies appears the Noldorin name Silevril as the cognate for Quenya Silmaril.[12] Tolkien appears to have retained the Noldorin form in Sindarin, since the name Pennas Silevril (apparently the Sindarin translation of Quenya Quenta Silmarillion)[13] is used in later manuscripts.[14]

In Aelfwine's Old English translations, the name Silmaril is rendered phonetically as Sigelmaerels. As noted by Christopher Tolkien it is composed of OE sigel ("sun, jewel") maerels ("rope"), actually referring to the Nauglamir.[16]

The Silmarils appear since the earliest version of the legendarium in The Book of Lost Tales. Although they do not have the same importance as in later versions, their making is described in more detail:

Then arose Fëanor of the Noldoli and fared to the Solosimpi and begged a great pearl, and he got, and he gor moreover an urn full of the most luminous phosphor-light gathered of foam in dark places, and with these he came home, and he took all the other gems and did gather their glint by the light of white lamps and silver candles, and he took the sheen of pearls and the faint half-colours of opals, and he [?bathed] them in phosphorescence and the radiant dew of Silpion, and but a single tiny drop of the light of Laurelin did he let fall therein, and giving all those magic lights a body to dwell in of such perfect glass as he alone could make nor even Aulë compass, so great was the slender dexterity of the fingers of Fëanor, he made a jewel — and it shone of its own [?wizardous] radiance in the uttermost dark; and he set it therein and sat a very long while and gazed at its beauty.

Fëanor made two more jewels, and called them Silmarilli, or Silubrilthin in the language of the Noldoli. Of all the many jewels made by the Noldoli, and of all the pearls of the Solosimpi, the jewels of Fëanor were held as the most beautiful.[17] Their relation with pearls can be seen in their etymology: Qenya Silmaril came from Sil ("Moon") + marilla ("pearl"); while Gnomish Silubrilt came from Sil + brithla ("pearl").[18]

After the Noldoli were banished from Kôr to Sirnúmen, the Silmarils were put in an ivory casket, and guarded among the many jewels. Later Melko stole all the treasures of the Noldoli, including the Silmarils.[19]