"And so there came to pass the last and cruellest of the slayings of Elf by Elf; and that was the third of the great wrongs achieved by the accursed oath."
― Quenta Silmarillion, "Of the Voyage of Eärendil and the War of Wrath"

The Third Kinslaying was the disastrous attack on the Havens of Sirion by the surviving Sons of Fëanor in F.A. 538.[1] The battle was considered the worst of the three Kinslayings.

Fëanor and his Sons had sworn an oath to acquire the Silmarils at any cost after they were stolen by Morgoth who fled to Middle-earth.[2] One of the jewels was stolen from Morgoth by Beren and Lúthien where it would later be set upon the Nauglamir. Later it came to the possession of Dior, son of Beren, and he restored the kingdom of Doriath after it was sacked by the Dwarves of Nogrod. However the sons of Fëanor attacked Doriath hoping to gain the Silmaril, but it escaped their grasp when Elwing, daughter of Dior, fled with it along with the survivors of Doriath to the Mouths of Sirion.[3]

When Maedhros learned that Elwing survived the destruction of Doriath and dwelt in the Havens with the Silmaril, he withheld his hand but soon the oath compelled him to act and sent word to the Havens demanding the jewel. The peoples of the Havens as well as Elwing refused.[4]

As a final resort, the Sons of Fëanor sacked the Havens in what was considered to be the 'cruellest of the slayings of Elf by Elf'. Some of the Fëanorians did not take part in the slaughter and rebelled against their lords aiding Elwing and in turn they were slain. Maedhros and Maglor emerged victorious at the end but they did not gain the Silmaril for Elwing had cast herself into the sea with it. Amrod and Amras were slain in the battle leaving only Maedhros and Maglor as the remaining sons of Fëanor.[4] 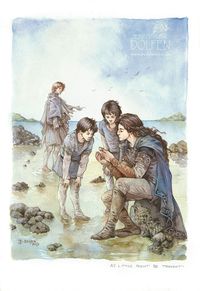 The Mannish poet Dírhavel was also among those who fell.[5]

Elwing and the Silmaril were not lost as Ulmo bore her up from the waves and took the form of a great white bird and she flew over the sea seeking Eärendil. Eventually she found him and using the Silmaril they both reached Aman.[4]

The first iteration of the battle is told in notes of The Tale of Eärendel, in this early version the raid is carried out by Melko in which Elwing is taken captive.[6] This was later abandoned and the raid on the Havens is carried out by the Sons of Fëanor.[7]

In the Annals of Beleriand it is noted that Damrod and Díriel (earlier names of Amrod and Amras) lead the attack on the Havens with Maidros and Maglor reluctant to aid them.[8][9]