Alqualondë, the Swanhaven, was the chief city of the Falmari on the shores of Valinor. The city is said to be north and east of Tirion between the Calacirya and Araman in northern Eldamar.

The city was built in a natural harbour made of rock, and was also walled. Its entrance was a natural arch. Other than the great harbours, it also housed the mansions of Olwë. The city was covered with the pearls the Elves had found in the sea and jewels which they obtained from the Noldor, and it was lit with many lamps. The famed swanships with golden beaks and eyes of jet were moored there.[1] 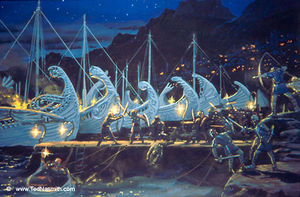 The Kinslaying of Alqualondë by Ted Nasmith

In the Year of the Trees 1162, the Falmari who abandoned Tol Eressëa began to build Alqualondë with the help of the Noldor.[2] Its lord was Olwë.

When Fëanor rebelled against the will of the Valar, he went to the shores of Aman, seeking for a way to reach Middle-earth. He demanded the use of the Telerin ships, however, the Teleri refused and resisted when Fëanor ordered the Noldor to take them by force. A battle broke out, the First Kinslaying, in which many Teleri were slain, for they were armed with mere hunting bows against the fully armed Noldor. They also attempted to block the harbor. The battle was joined by the hosts of Fingon and Fingolfin, many of whom thought that the Teleri had attacked the Noldor.

In the later years of the First Age, Alqualondë was visited by Eärendil and Elwing who had reached Valinor. Elwing stayed a little there and told stories to the Teleri about the griefs of Beleriand.[3]

Alqualondë means "Swanhaven" or "Haven of the Swans"[4] in Quenya, from alqua ("swan") + londë ("harbor, haven").[5] In The Book of Lost Tales Part One the haven's name has the form Alqualuntë.[6]