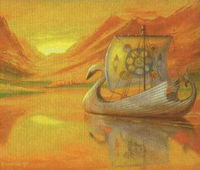 The Burden of Time by Donato Giancola

The Swan-ships were Elven ships crafted to resemble swans.

When the Teleri came to Aman and dwelt at Alqualondë, they built white ships in the likeness of swans. These ships had eyes of gold and jet, and their beaks also were golden.[1] Fëanor later demanded the ships from the Teleri, purposing to use them to carry himself and the Noldor back to Middle-earth. Olwë refused to surrender the ships, however, saying, “the white timbers we wrought with our own hands, and the white sails were woven by our wives and our daughters…these are to us as are the gems of the Noldor: the work of our hearts, whose like we shall not make again.” Fëanor then led the Noldor in an assault on the Teleri, taking the ships by force. Fëanor later burned the ships at Losgar, destroying the fairest vessels ever to sail the sea.[2] 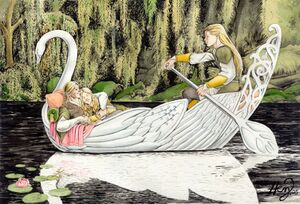 The Elves of Lothlórien built a "swan-shaped barge", having a "curved neck, and jewelled eyes, and half-raised wings".[3]

"...sailing proudly down the stream toward them, they saw a swan of great size. The water rippled on either side of the white breast beneath its curving neck. Its beak shone like burnished gold, and its eyes glinted like jet set in yellow stones; its huge white wings were half lifted. A music came down the river as it drew nearer; and suddenly they perceived that it was a ship, wrought and carved with elven-skill in the likeness of a bird. Two elves clad in white steered it with black paddles. In the midst of the vessel sat Celeborn, and behind him stood Galadriel, tall and white; a circlet of golden flowers was in her hair, and in her hand she held a harp, and she sang."[4]

The emblem of the Prince of Dol Amroth was a silver-upon-blue banner, bearing a ship with a swan-prow upon the sea.[5]

In the The Book of Lost Tales, Aulë seems to have been the first to make "great vessels like to the bodies of swans".[6]

A detail left out from the description of the swan-boat of Lothlórien in The Fellowship of the Ring (either out of space constraints, literary considerations, or because the idea was abandoned), has been provided by Christopher Tolkien:

"Two elves, clad in white, steered it with black paddles so contrived that the blades folded back, as a swan's foot does, when they were thrust forward in the water."[3]

A swan-ship can be seen along the banks of Celebrant, a small river running from Mirrormere to Anduin, near the tributary to Anduin in Lothlórien.