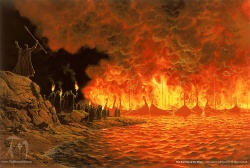 The Burning of the Ships by Ted Nasmith

Losgar was a place at the mouth of the Firth of Drengist, in Lammoth, the cold lands north-west of Beleriand.[1]

It was here that Fëanor landed during the Long Night with the stolen swan-ships of the Falmari, and gave the order to burn them, because he considered the host of Fingolfin and Finrod to be "needless baggage on the road", saying: "Let those that cursed my name, curse me still, and whine their way back to the cages of the Valar". In the event, the Noldor left behind chose instead to march across the deadly Helcaraxë.[2]

According to a legend, another reason to burn the ships at Losgar was to prevent some Noldor from turning back, such as his own son Amrod, who was uncomfortable with his father's deeds. According to this legend, Amrod died as he was still sleeping inside the first ship burned.[3]

Losgar is Sindarin, but it is never glossed. However, the name appears in The Book of Lost Tales, meaning "Place of Flowers" in Gnomish, but it is a rejected name for Alalminórë, a region of Tol Eressëa.[4]