"For Fëanor was made the mightiest in all parts of body and mind: in valour, in endurance, in beauty, in understanding, in skill, in strength and subtlety alike: of all the Children of Ilúvatar, and a bright flame was in him."
― Quenta Silmarillion, "Of the Sun and Moon and the Hiding of Valinor"

Fëanor was the eldest and most beloved son of Finwë and succeeded him to the Kingship of the Noldor.

Being the greatest of the Noldor, he had the greatest skill of word and hand, was a renowned craftsman, gem-smith, and warrior. His most famous deed was the creation of the Silmarils, whose theft made him lead his people to the exile. As the leader of the rebellion, his passionate hatred of Morgoth and terrible oath led directly to the great triumphs and tragedies of the First Age.

Born in Y.T. 1169,[2] Fëanor was the eldest son of Finwë, the first King of the Noldor, and his first wife Míriel Þerindë. He drew so much of Míriel's life energy when he was born that she grew weary of living, and departed to Lórien, where she voluntarily left her corporeal form and died. Finwë remarried, and had two more sons, Fëanor's half-brothers Fingolfin and Finarfin,[3] and two daughters, Findis and Írimë.[4]

Feanor, deviser of the Tengwar. Art by Ryszard Derdzinski

Fëanor's skills began to blossom, and other than a skilled smith, he was a linguist and a Loremaster.[5] In 1250, he devised the lettering system of Tengwar, improving the work of Rúmil. He created the palantíri,[6] and also wrought the Fëanorian lamps in this time.[7] He then turned his mind to the study of gems.[8]

In 1400,[8] Melkor, the mightiest of the Valar and source of evil, deceived the Valar into thinking that he had repented of his evil ways. Pardoned and residing in Valinor, he undertook to corrupt the Noldor and succeeded in making them instruments of his malice, particularly Fëanor. But Fëanor greatly mistrusted Melkor, which was part of Melkor's plan.[3]

Inspired by a shadow of foreknowledge, he pondered how the light of the Two Trees might be preserved imperishable.[10] Many thought that this idea came first after seeing the Hair of Galadriel, which was both golden and silver. He admired her hair so much that he requested a tress three times, but Galadriel refused each time and would not give him even a single strand.[11] Therefore, in 1449, Fëanor began, and by 1450 he had succeeded[8] in the greatest of his achievements: capturing the light of the Two Trees to make the three Silmarils, also called the Great Jewels. He prized the Silmarils above all else, and displayed them in feasts upon his brow. But later he grew increasingly suspicious that the Valar and other Eldar coveted them, until he jealously guarded them from all except his immediate family.[10]

The Threat of Feanor by Antti Autio

Melkor greatly desired the Silmarils and his hatred for Fëanor grew, but the Valar still did not know of Melkor's true intentions. Melkor played upon Fëanor's temperament and pride to convince him that his own half-brother Fingolfin was not only planning to usurp his place as heir to Finwë, but also seize the jewels for himself.[10] The Noldor then began forging weapons, which at that point no other Eldar possessed in Valinor. Fëanor's hostility grew to the point where, in 1490,[8] he threatened Fingolfin's life. For this, the Valar exiled him to Formenos. He took a substantial treasure with him, including the Silmarils, which he stowed in a locked box. In a show of support for his eldest son, Finwë withdrew to Formenos as well.[10]

The Valar realized that Melkor was behind Fëanor's actions. They sent Tulkas to imprison him again, but he could not be found. Melkor was not seen for a long time, until in 1492,[8] he unexpectedly showed up at Formenos. Melkor tried again to manipulate Fëanor, but he went too far, and Fëanor realized that Melkor's true goal was to obtain the Silmarils. He shut the door in Melkor's face. In a rage, Melkor left. When the Valar heard of the incident, they resumed the hunt, but it was apparent that Melkor had fled from Valinor.[10]

[edit] Theft of the Silmarils

In 1495,[8] the Valar sought to reconcile Fëanor and Fingolfin, and to mend the enmity between the Noldor and Valar, and invited them all to Valimar to make peace. Fingolfin offered a hand to his half-brother, recognizing Fëanor's place as the eldest, which he grudgingly accepted.

Feanor and his sons by Lída Holubová

Meanwhile, after first feigning to go north, Melkor had stolen away to Avathar in the south of Aman to seek out the evil, spider-like creature Ungoliant. Even as Fëanor and Fingolfin were reconciled, Ungoliant helped Morgoth destroy the Two Trees, bringing darkness to Valinor.[12]

Yavanna examined the Two Trees and found them lifeless. The light of the Trees survived only in the Silmarils and she said that only by their power could she restore the Trees. Manwë then asked Fëanor to give them up for this purpose but Fëanor emphatically declared that he would not give up his Silmarils of his own free will; if the Valar forced him, he said, they would be no better than Melkor. It was after this that messengers came telling of the raid at Formenos.

According to the messengers, Melkor, surrounded by an impenetrable black fog, had come to Fëanor's vault in Formenos. Finwë fought and lost against Melkor, and was the first to be slain in Valinor. Melkor ransacked the vault, taking many valuable jewels, including the Silmarils. He and Ungoliant escaped by crossing the Helcaraxë, or Grinding Ice, in the north to Beleriand in Middle-earth.[13] 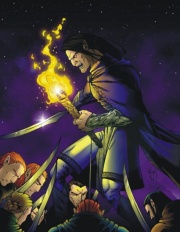 Fëanor (The Oath) by Angel Falto

The Valar and Eldar now fully understood the extent of Melkor's treachery. Fëanor, upon learning of his father's murder and the theft of his prized Silmarils, named Melkor "Morgoth", or "Black Enemy". Following his father's death, Fëanor claimed the kingship of the Noldor and delivered an impassioned speech, which he unwittingly filled with Morgoth's lies. He rallied the Noldor against the Dark Lord, but because of Morgoth's influence, he also blamed the Valar for Morgoth's deeds. He persuaded most of his people that because the Valar could not protect them, the Noldor must follow him to Middle-earth and fight the Dark Lord. Fëanor then swore the terrible Oath of Fëanor which all seven of his sons also proclaimed, vowing to fight anyone and everyone—whether Elf, Man, Maia, or Vala—who withheld the Silmarils, and invoking even Ilúvatar as a witness. This Oath led to much conflict and later caused great tragedy among his seven sons.

Seeking a way to get to Middle-earth, he went to the shores of Aman, where the seafaring Teleri lived, and demanded the use of their ships. When the Teleri refused to give or lend their vessels, Fëanor ordered the Noldor to take the ships by force. The Teleri resisted, and a battle broke out, in which many of the Teleri were slain, for they were armed with mere hunting bows, against the fully armed Noldor. Three times the Teleri were able to push back Fëanor until Fingon, leading the host of Fingolfin his father, joined the battle thus overwhelming the Teleri.

Due to this act, the Valar proclaimed the Doom of the Noldor, in which they prophesied failure for all those who followed the House of Fëanor. Fëanor resolved to go on, and added a further prophetic statement that their deeds would live on in song until the ending of the world. However, those who repented came back with Finarfin, Finwë's third son. They were accepted by the Valar, and Finarfin ruled as King of the remaining Noldor in Valinor.[13]

[edit] Exile to Middle-earth and death

As the year 1496 wore on Fëanor led the Noldor northward. By 1497, the host had reached the Helkaraxë and halted.[14] There were not enough ships to carry all of the Noldor across the sea, so Fëanor and his sons seized the ships and departed. Upon arriving at Losgar, the outlet of the Firth of Drengist in the land of Lammoth, in the far west of Beleriand, where Morgoth and Ungoliant had passed not long before, Fëanor decided to burn the ships and leave the followers of Fingolfin behind.[13] The earth being flat in those days, the remaining Noldor saw the flames, and perceived that if they were to reach Middle-earth, they had no choice but to cross the Helcaraxë. This they did under the leadership of Fingolfin, and suffered heavy losses along the way, which greatly added to the animosity they had for the House of Fëanor.[13] 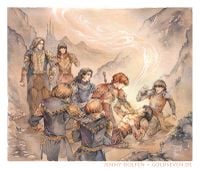 Death of Feanor by Jenny Dolfen

Learning of the Noldor's arrival, Morgoth summoned his armies from his fortress of Angband and attacked Fëanor's encampment in Mithrim. This battle was called the Dagor-nuin-Giliath ("Battle-under-Stars"), for the Sun and Moon had not yet been made. The Noldor managed to win the battle and disperse Morgoth's armies. Fëanor, still in a great rage, pressed on toward Angband with his sons. He came upon the confines of Dor Daedeloth, but was ambushed by a force of Balrogs, with few elves about him. He fought mightily, hewing his foes, even after receiving several wounds, but was bested by Gothmog, lord of Balrogs.

His sons came upon the balrogs with a great force of elves, and were able to drive them off. However, as Fëanor was being carried off the battlefield, he knew his wounds were fatal. He was brought to the slopes of the Ered Wethrin where he saw from afar the peaks of Thangorodrim. He cursed Morgoth thrice, but with the eyes of death, he knew that the elves, unaided, would never throw down the dark towers. At the moment of his death the passing of his fiery spirit reduced his body to ashes. He was the only person to die this way, for no death like his was ever seen or heard.[15]

His sons were still bound by the Oath to recover the Silmarils, which would determine many of the events of Middle-earth during the First Age.

Fëanor's spirit remained in the Halls of Mandos and would never be reincarnated in Arda.[15] It is said that he will return for Dagor Dagorath, and will finally reclaim his beloved Silmarils and break them so Yavanna can use their light to restore the Two Trees.[16]

Fëanor is an unusual combination of Quenya and Sindarin: fëa ("spirit, soul") + naur ("fire").[17] The name is actually a half Sindarized version of his Quenya mother-name Fëanáro; the proper Sindarin form should have been Faenor.[4]

The name has changed since early versions of the legendarium, so in the very first concepts, Fëanor is given as the Qenya cognate of Gnomish Fionor ("Goblet Smith").[18] However, Tolkien used Fëanor in the narrative of the Lost Tales.[19] In the Noldorin phase, Fëanor is the original name while Fëanáro is the Qenya cognate. Both meant "Radiant Sun", from Primitive Quendian Phayanâro.[20]

When Fëanor was born, he was first called Minyon ("First-begotten").[21] His father-name was at first the same as his father: Finwë,[4] or simply Finwion ("Son of Finwë").[22] But when he showed his abilities it was enlarged to Curufinwë,[4] by adding curu ("skill").[23]

There exists a compilation of texts called the Early Runic Documents, contemporary with The Book of Lost Tales, one of which identifies Fëanor with the legendary Germanic smith called Wayland. That story is placed during the wars of the Elves with Melko.

In that text, Fëanor was captured by a man called Niðad[note 1], King of the Niaroth. However, Fëanor killed Niðad's sons[note 2] and managed to escape by crafting artificial wings for himself; he also made love to the king's daughter Beaduhilde and fled with her, but ultimately lost her in the woods.

Eventually Beaduhilde (who was now pregnant) forgave Fëanor, and in spite of her father's wrath at her pregnancy, she still managed to obtain Niðad's blessing upon her son.[24] For more information, see Inspiration.